Transcallosal Resection of a Colloid Cyst

Colloid cysts represent 0.5%–1% of intracranial lesions and are located within the third ventricular roof immediately adjacent to the foramen of Monro. These cysts uniquely contain a viscous gelatinous material and originate from abnormal folding of the primitive neuroepithelium (the paraphysis elements).

Colloid cysts can reach a substantial size and exceedingly rarely precipitate a sudden occlusion of the foramen of Monro, causing life-threatening acute obstructive hydrocephalus. The method of occlusion can be related to acute intracystic hemorrhage, postlumbar puncture transposition of the mass, or shunt malfunction.

In most cases, colloid cysts are asymptomatic and discovered incidentally.

Figure 1: The typical location of a small colloid cyst in the coronal and sagittal planes. Colloid cysts are intimately associated with the choroid plexus along the rostral roof of the third ventricle. Despite their small size, they can cause massive obstructive hydrocephalus.

For a general discussion of diagnosis and evaluation for ventricular tumors, including colloid cysts, see the Principles of Intraventricular Surgery chapter.

Colloid cysts appear as mildly hyperdense lesions on computed tomography (CT) scan and may rarely contain calcifications. On T2-weighted sequences, they are hyperintense compared to white matter; on T1 images, they lack contrast enhancement. These lesions do not generally increase significantly in size; however, intracystic hemorrhage can lead to giant cysts. 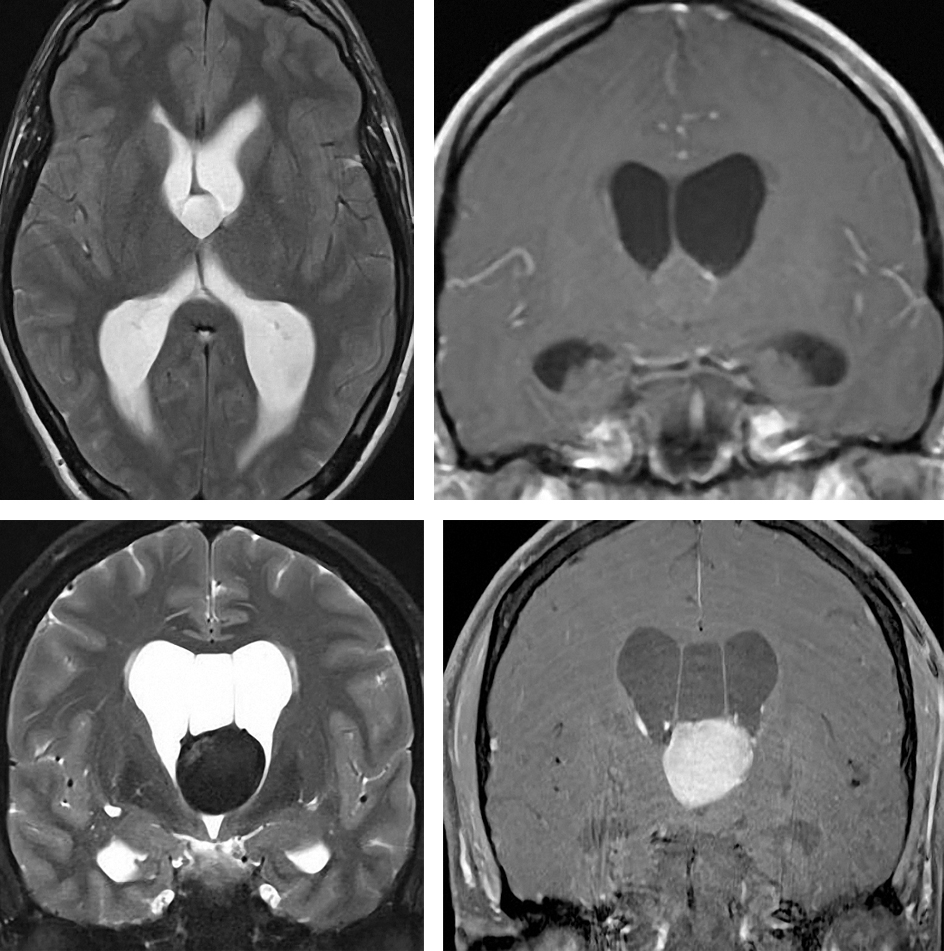 Management of colloid cysts depends upon the patient’s clinical state. Asymptomatic lesions may be managed conservatively with routine radiographic evaluation for interval change. If the patient becomes symptomatic, endoscopic or microsurgical resection is appropriate

Resection of asymptomatic lesions is a matter of intense controversy because acute life-threatening hydrocephalus is possible, although exceedingly rare. Large cysts (>10mm in diameter) have been noted to be potentially associated with an increased risk of causing hydrocephalus. Overall, there is no reliable indicator for a need to intervene among asymptomatic lesions that are not associated with hydrocephalus; I do recommend observation for these patients.

Headaches, in the absence of hydrocephalus, is not an indication for intervention.

Patients suffering from symptomatic acute hydrocephalus require emergent ventriculostomy. I usually plan to approach the lesion via the nondominant interhemispheric corridor unless the dominant ventricle is substantially larger on preoperative imaging.

I have not used the endoscopic method for resection of colloid cysts because it is difficult to consistently achieve gross total cyst wall removal with this method. A risk of future cyst recurrence persists. Nonetheless, endoscopic resection is reasonable for older patients with symptomatic cysts.

Please refer to the Anatomy of the Ventricular System for further details.

The transcallosal approach is ideal for patients suffering from mild hydrocephalus. 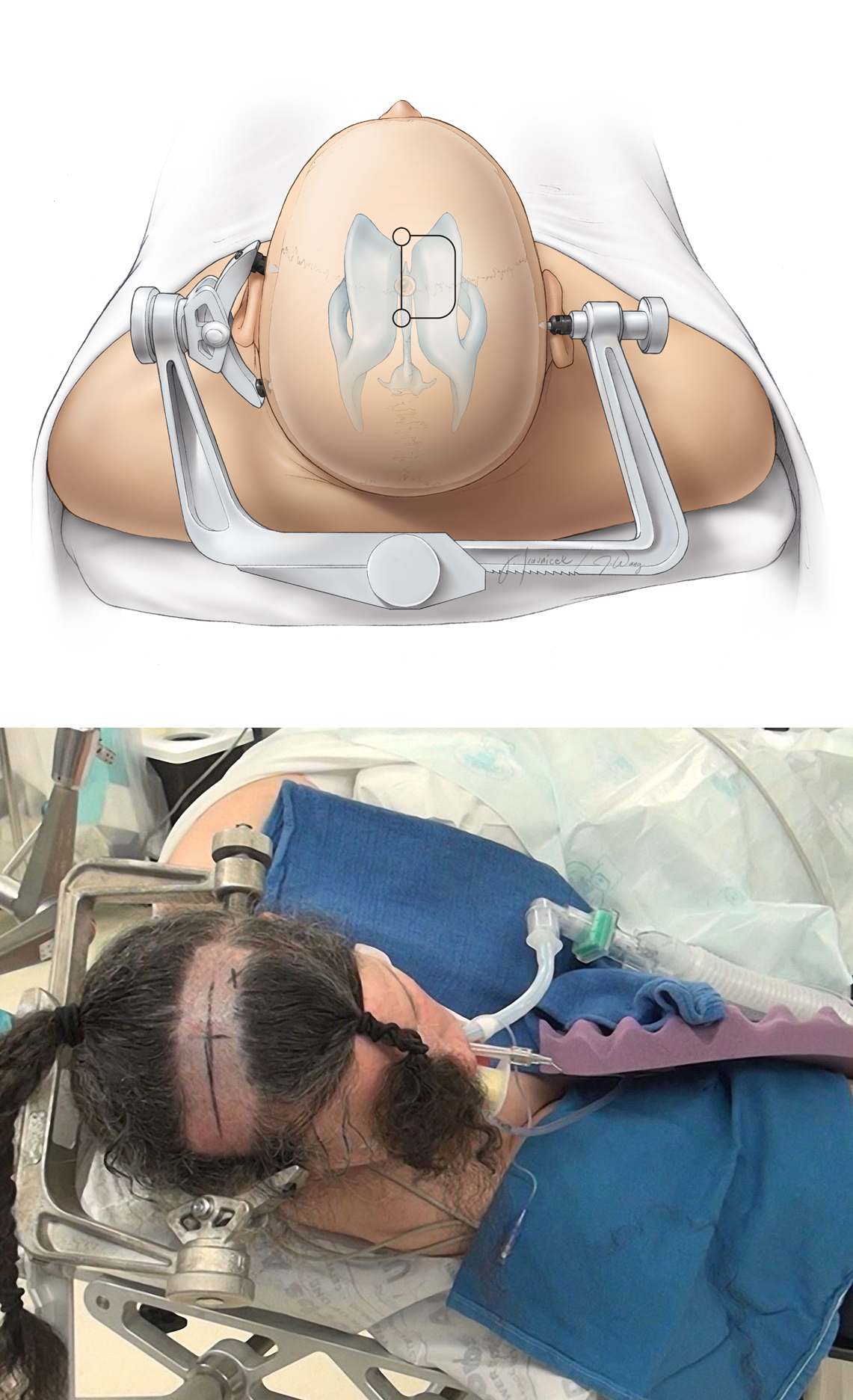 Figure 3: Most operators prefer to place the patient in the supine position and use linear or horseshoe incisions. The craniotomy is situated two-thirds in front and one-third behind the coronal suture (top image). This position keeps the midline in the anatomic position, and most neurosurgeons find this configuration less disorienting during the deeper portions of the operation. I prefer to use the lateral head position with the sagittal sinus parallel to the floor (bottom image). Gravity retraction is effective and interhemispheric dissection can be performed more readily along the horizontal plane.

Please refer to the Interhemispheric Craniotomy and Lateral Ventricular Tumors chapters for further details related to craniotomy and exposure of the lateral ventricle. Intraoperative navigation is important for selection of a precise operative trajectory and a minimal callosotomy.

The surgeon should avoid injuring the genu of the internal capsule, located lateral to the foramen of Monro and separated by a thin layer of ventricular capsule where the thalamostriate vein orients medially to anastomose with the internal cerebral vein. 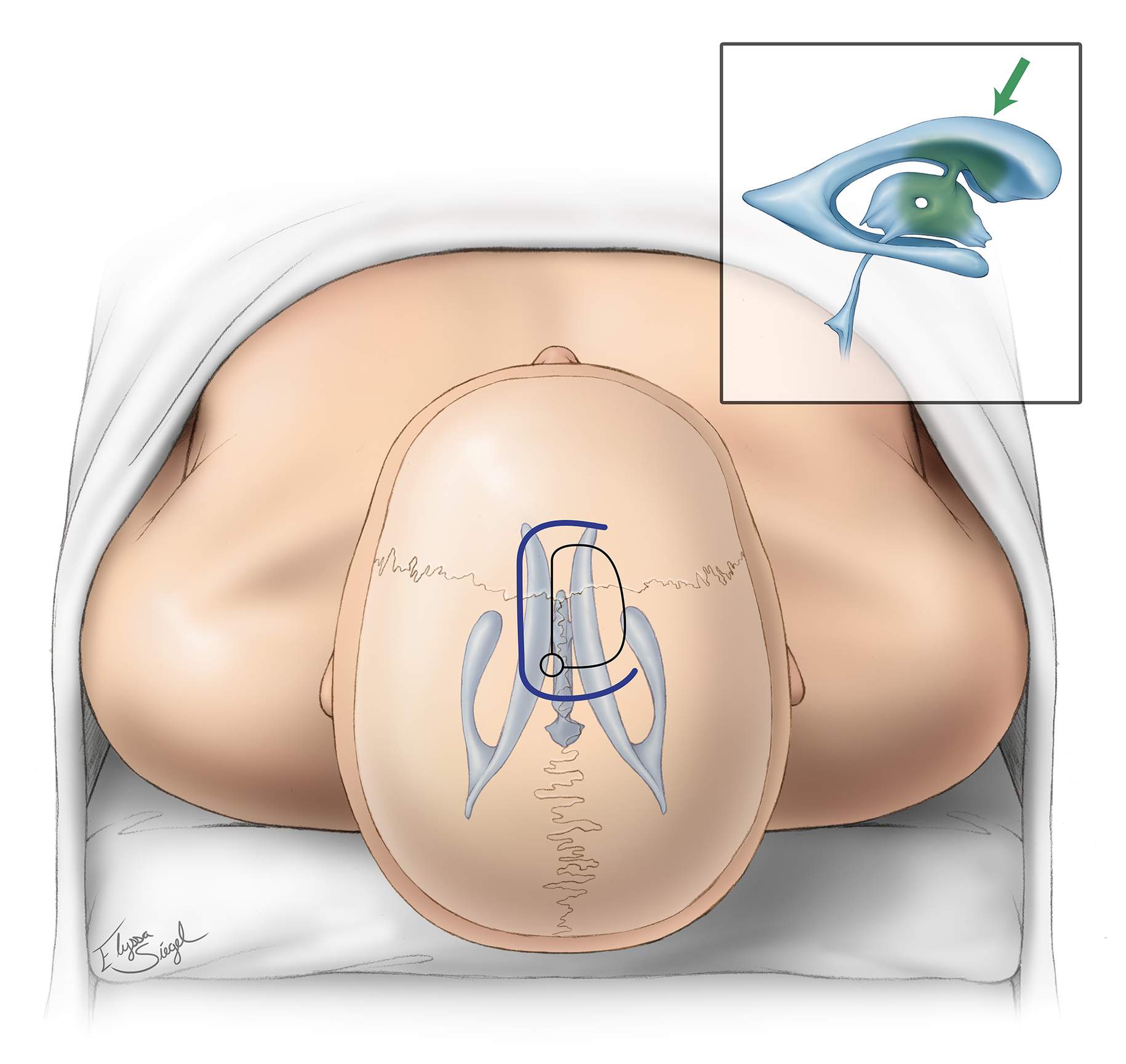 Figure 4: The basic principles of the anterior interhemispheric transcallosal approach are illustrated. Despite the presence of mild hydrocephalus, I may use lumbar drainage to minimize brain retraction during interhemispheric dissection. Moderate to significant hydrocephalus demand an external ventricular drain after dural opening through the craniotomy exposure and before the interhemispheric dissection is undertaken. The anteroposterior location of the craniotomy may be slightly adjusted based on the location of the lesion within the ventricle. The reach of this approach is shaded in green (inset image). 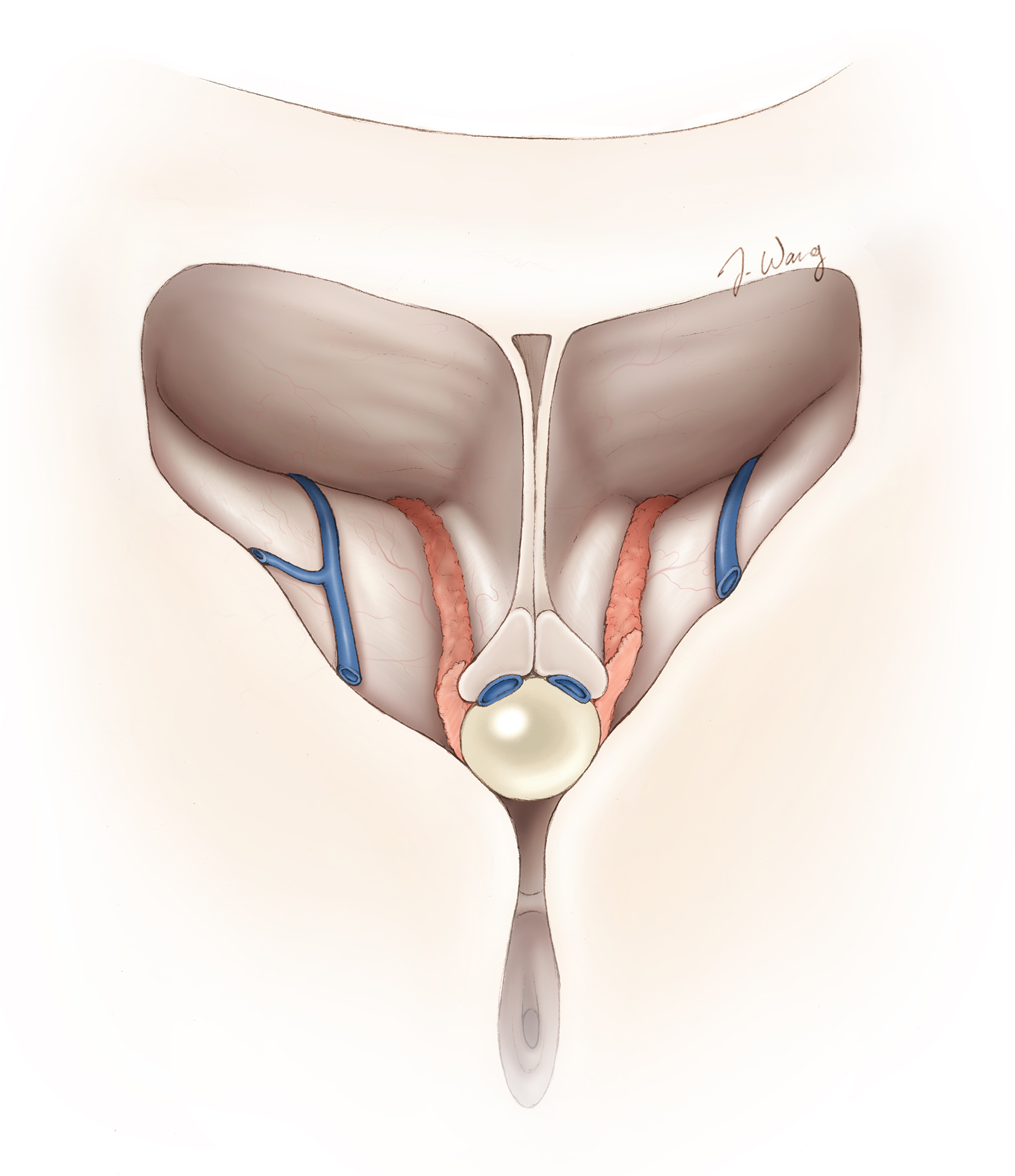 Figure 5: The pathoanatomy of the cyst in relation to the columns of fornix and internal cerebral veins is demonstrated. The posterior capsule of the cyst may be adherent to the internal cerebral veins. This is an operative blind spot within the posterior aspect of the foramen. Careful circumdissection is advised, and the capsule should not be pulled out of the resection cavity without its sharp dissection. 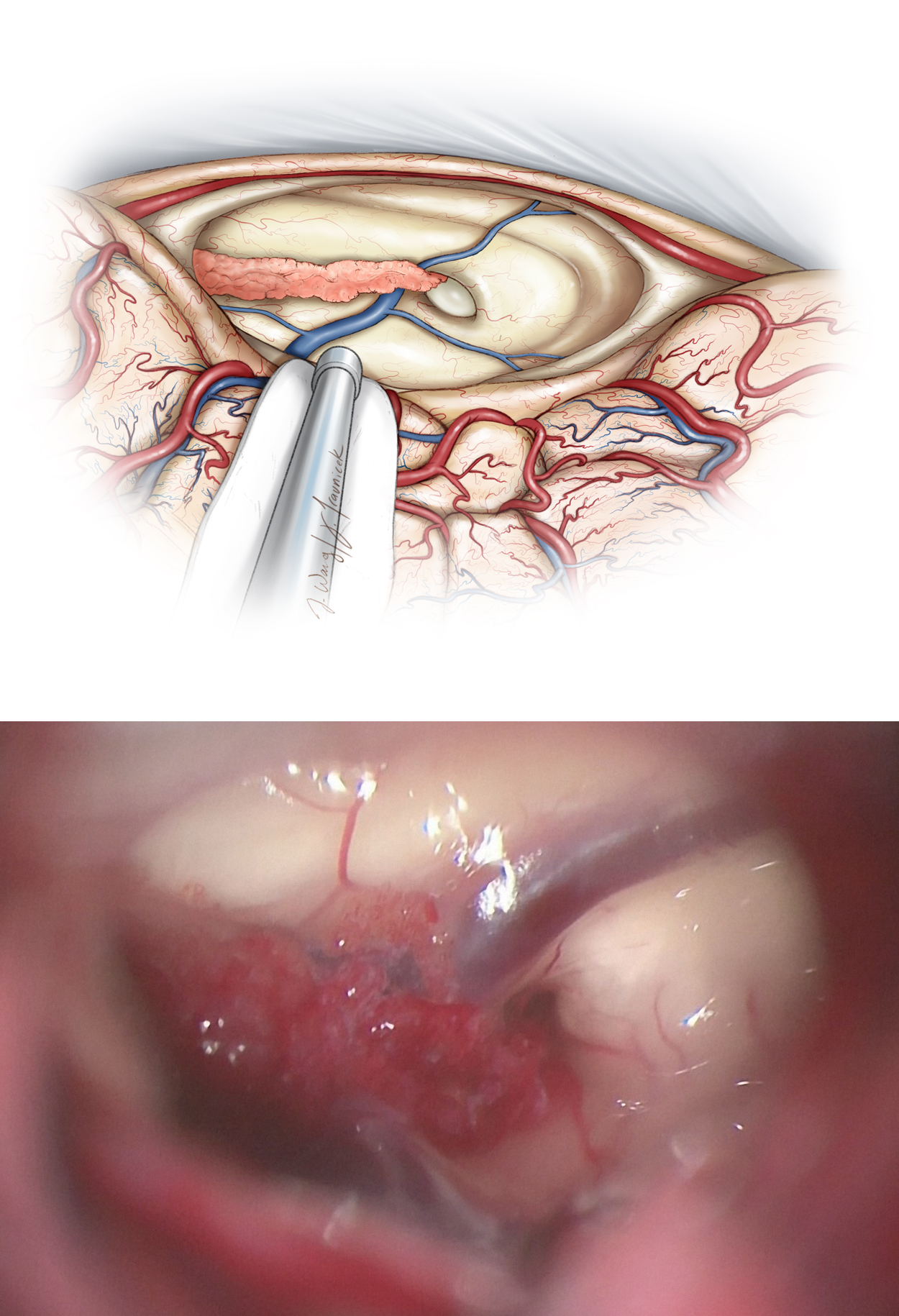 Although initially there seems to be an inadequate working space within the foramen, the puncture of the cyst and thorough evacuation of its gelatinous content will create ample space for microdissection of its capsule. In rare circumstances, the septal vein may be disconnected from the thalamostriate vein to expand the transforaminal corridor via a small anterior transchoroidal dissection. This maneuver obviates the need to excessive manipulation of the fornix.

Figure 7: The anterior aspect of the choroid plexus is reduced through its mobilization and coagulation (upper illustration). Dynamic retraction is used and fixed retractors are voided. Only ~1-1.5 cm of callosotomy is typically necessary for resection of a colloid cyst (middle intraoperative photo). The herniation of the septum pellucidum into the operative field (lower intraoperative photo-blue arrow) indicates noncommunicating hydrocephalus of the contralateral ventricle. I fenestrate the septum pellucidum to relieve the pressure in the contralateral chamber, reducing the septum out of my operative space. 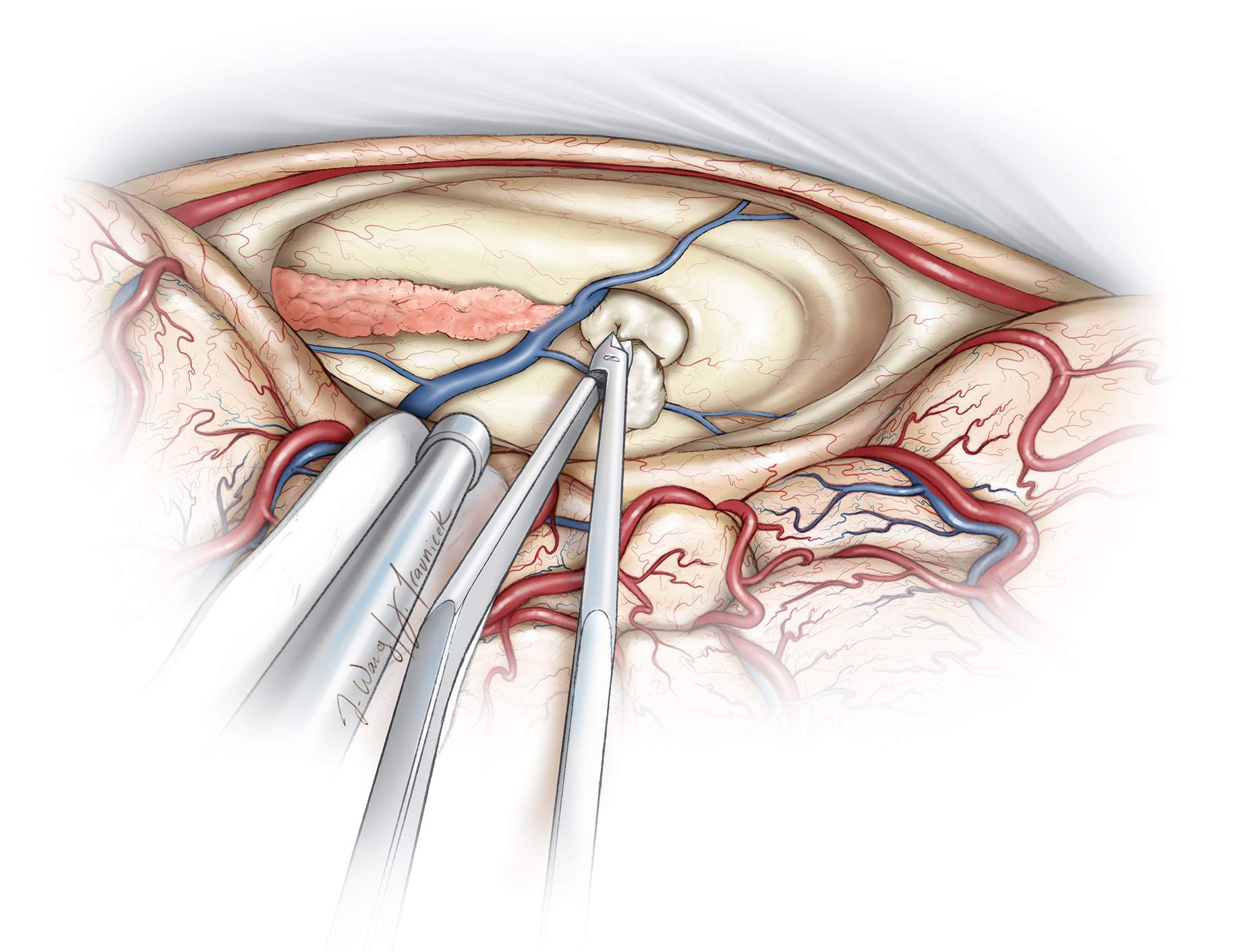 Figure 8: Opening of the cyst wall and aggressive suctioning of its internal contents is pertinent for cyst decompression, exposure and mobilization of its capsule during circumdissection. 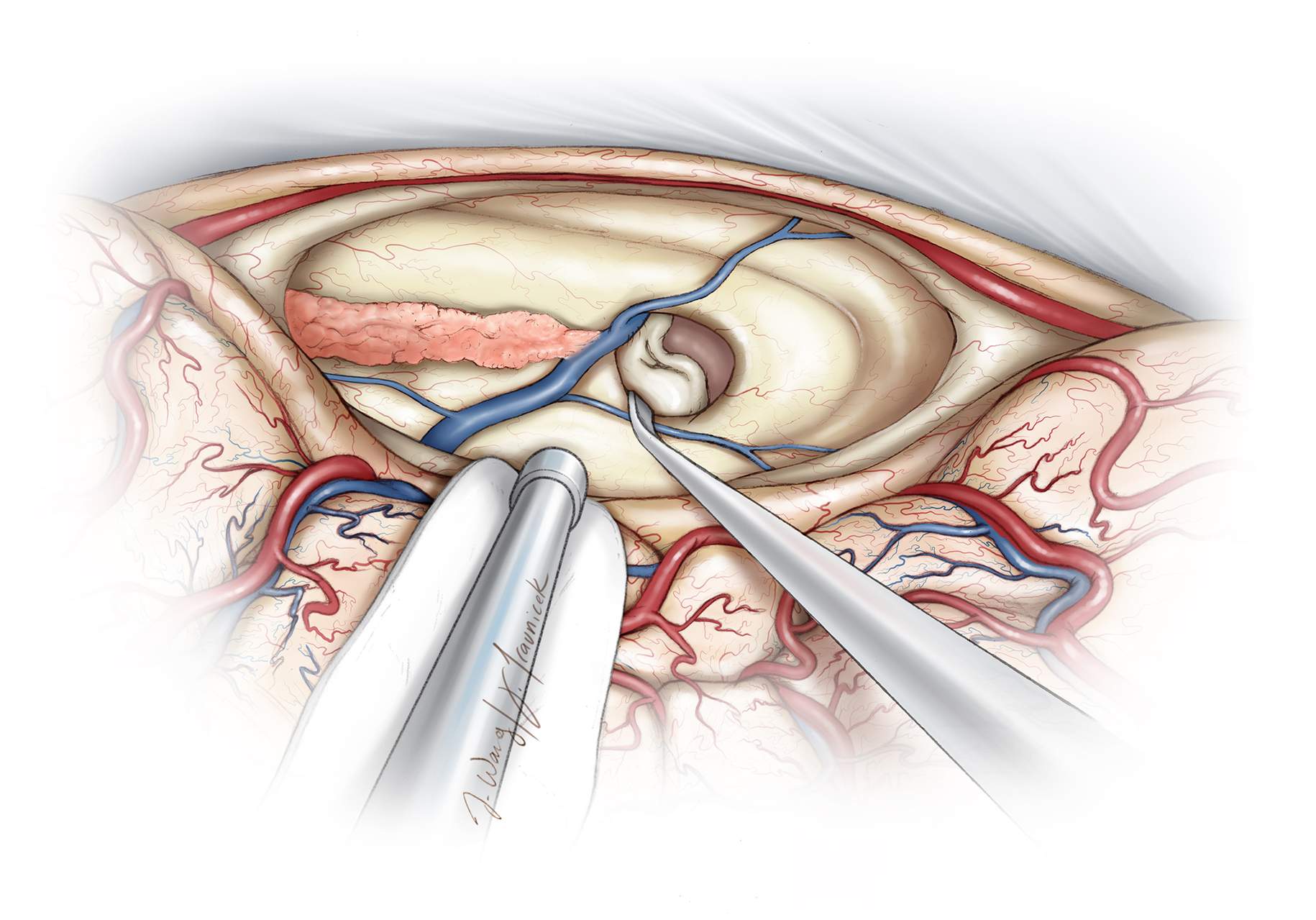 Figure 9: The capsule is thoroughly deflated and is readily dissected first anteriorly, next laterally, and finally posteriorly from the choroid plexus and other neurovascular structures along the roof of the third ventricle. The capsule is primarily adherent along the choroidal fissure. 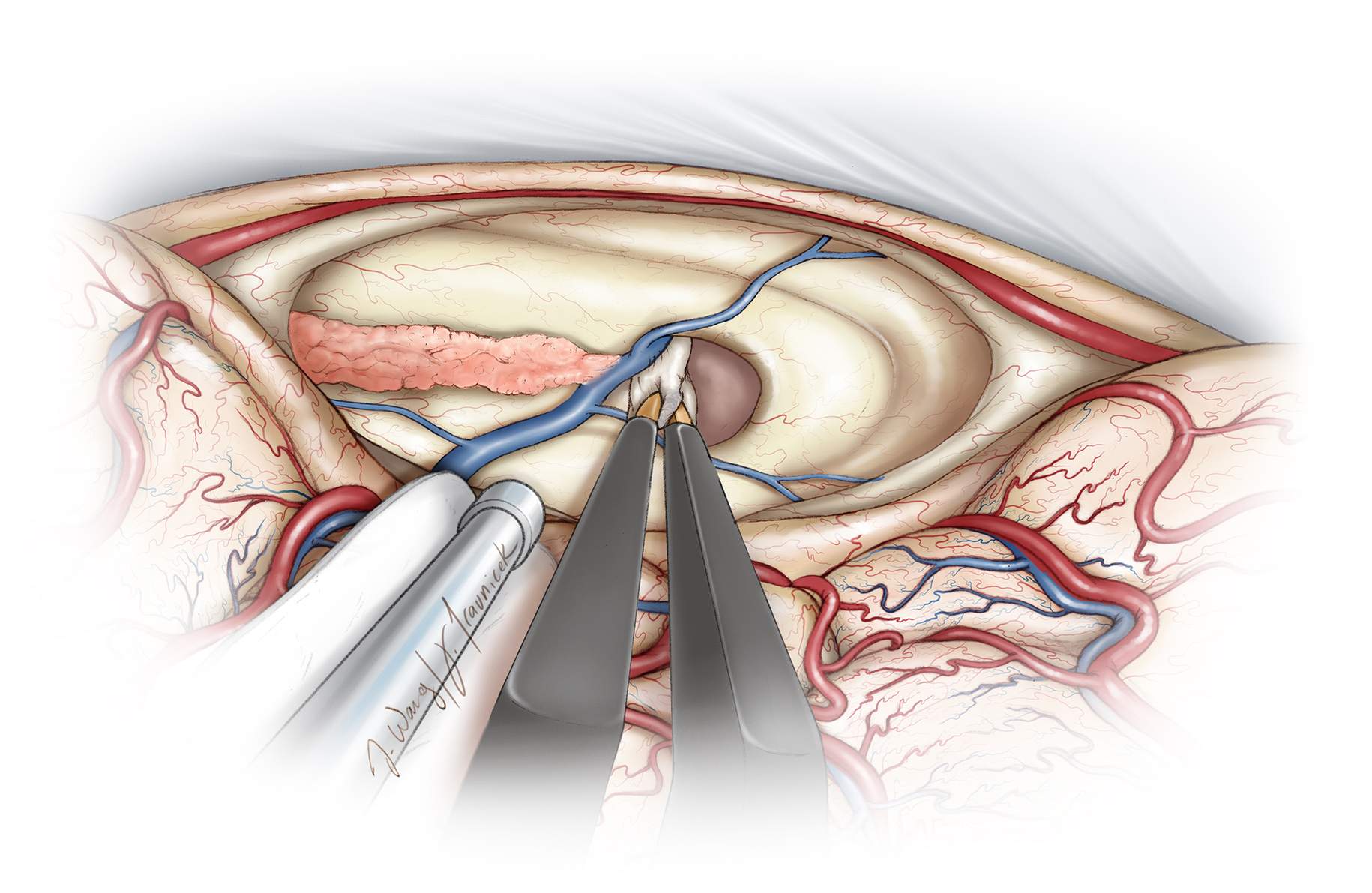 Figure 10: The capsule may be coagulated to shrink its size. The fornix should not be manipulated at all cost. The suction device should not injure the surrounding normal structures. I remove the capsule en bloc, not piecemeal. 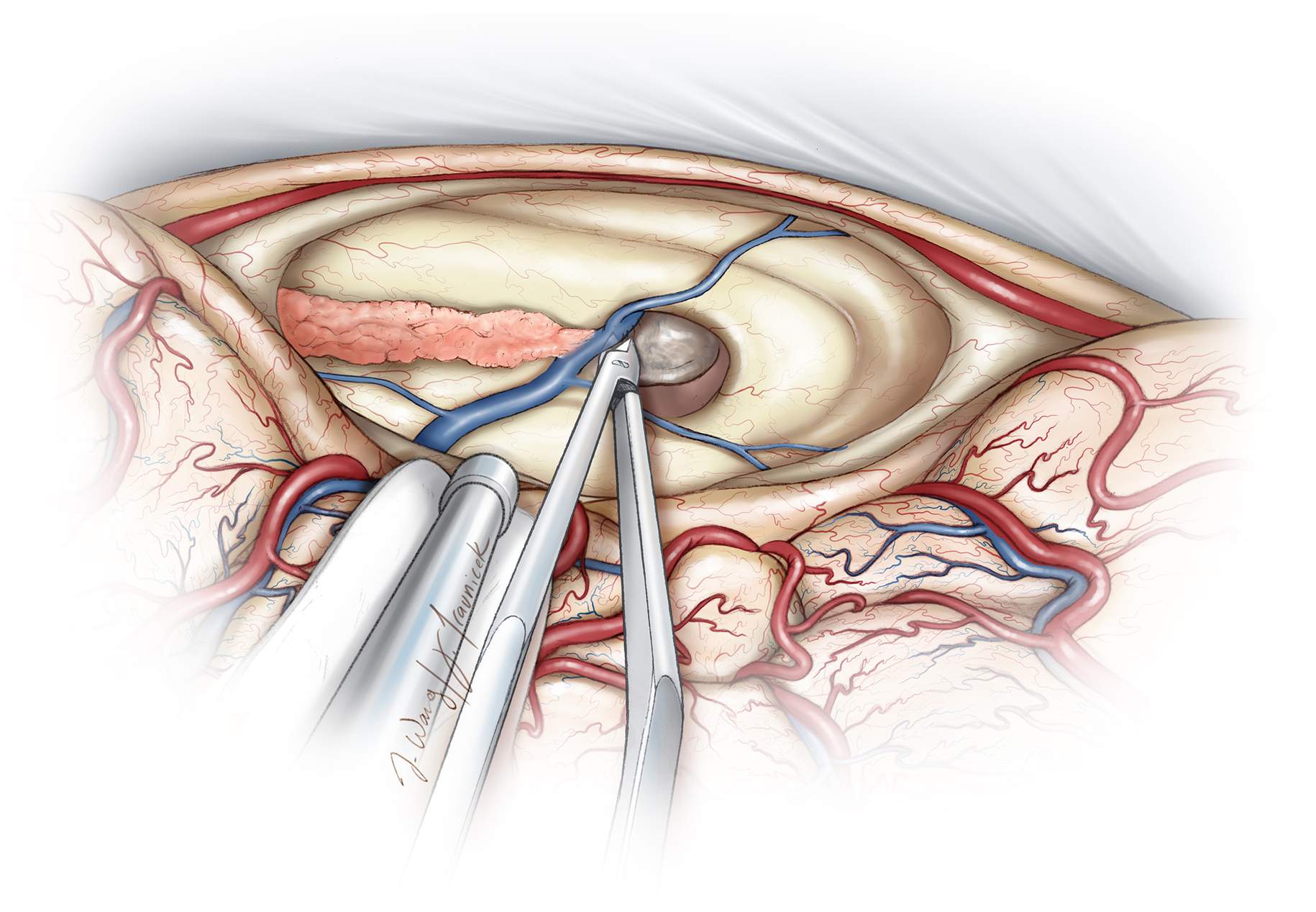 Figure 11: The capsule is disconnected from the choroid plexus and internal cerebral veins using sharp microdissection under direct vision. Some bleeding from the plexus is usually evident; gentle coagulation and ample irrigation avoid collateral injury to nonpathologic structures. The septum pellucidum may be fenestrated if significant preoperative hydrocephalus was present.

The ventricular cavities are generously irrigated to evacuate any debris and control minor bleeding. I do not leave a ventricular catheter in place after resection of colloid cysts. This procedure is usually pristine. However, if the patient required preoperative placement of an external ventricular drain, the drain is left in the ventricle and weaned off postoperatively.

For a detailed discussion of postoperative care of patients with ventricular tumors, see the Principles of Intraventricular Surgery chapter.