OBJECTIVE: To describe the technical details of a 3-piece orbitozygomatic approach.

INTRODUCTION: In a 3-piece orbitozygomatic approach, soft tissue exposure is mostly comparable to the classic frontopterional approach. Osseous resection is a 3-piece operation that consists of first performing anterior and posterior cuts along the zygomatic arch, reflecting it down, attached to the masseter. This is followed by a classic frontotemporosphenoidal craniotomy, and finally, an osteotomy of the orbital rim, roof, and lateral wall of the orbit.

RESULTS: When compared with its 1- and 2-piece counterparts, 3-piece orbitozygomatic craniotomy, as described here, is a relatively simple operation and is thus advisable when considering an anterior or middle fossa approach. Brain exposure is wide, whereas cerebral retraction is minimal. We recommend avoiding orbit sectioning as deep as the superior orbital fissure.

The pterional approach (frontotemporosphenoidal approach)1-4 is one of the most common approaches in neurosurgery. Over the past 3 decades, significant improvements in cranial base surgery for lesion excision have been achieved as a consequence of greater osseous removal, which minimizes brain retraction.5 Orbitozygomatic craniotomy5-22 emerges as a result of this approach. Many variants of the orbitozygomatic approach have been developed since the initial description provided by Jane et al,16 Pellerin et al,18 Hakuba et al,13 and Al-Mefty.7 Some authors prefer the 1-piece variant,6-8,11,14,15,20 whereas others recommend the 2-piece approach.5,18,19,21 Herein, we present a simple way of performing the orbitozygomatic approach in 3 osseous pieces. 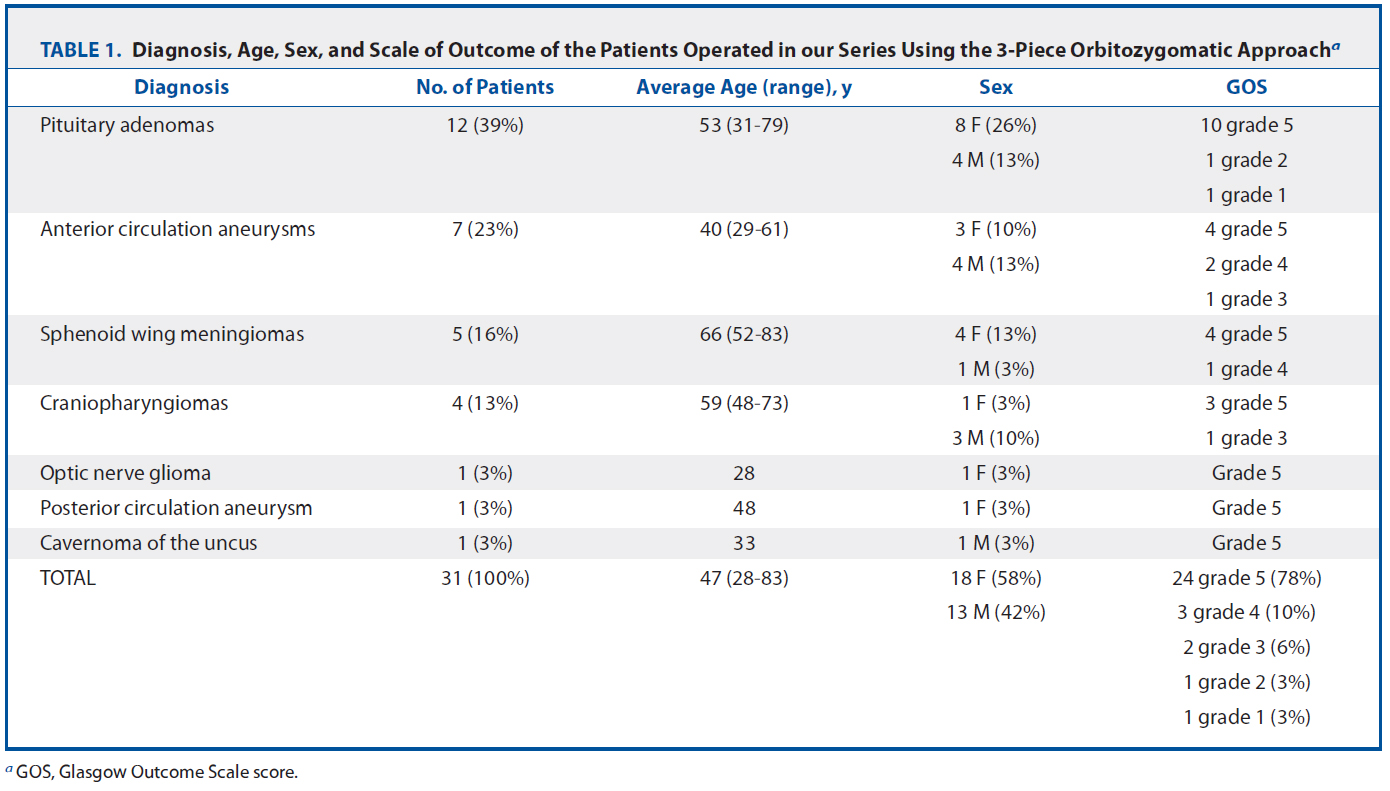 The patient is positioned supine, with the head rotated 10 to 40 degrees contralateral to the lesion. The patient’s head should be inclined away from the ipsilateral shoulder.

The incision begins at the level of the zygomatic arch root, just anterior to the tragus, and extends behind the hairline toward the contralateral pupillary line (Fig. 1A).5 In patients with thick subcutaneous tissue, the preauricular incision can be safely lowered to 20 mm below the upper edge of the zygomatic arch.23 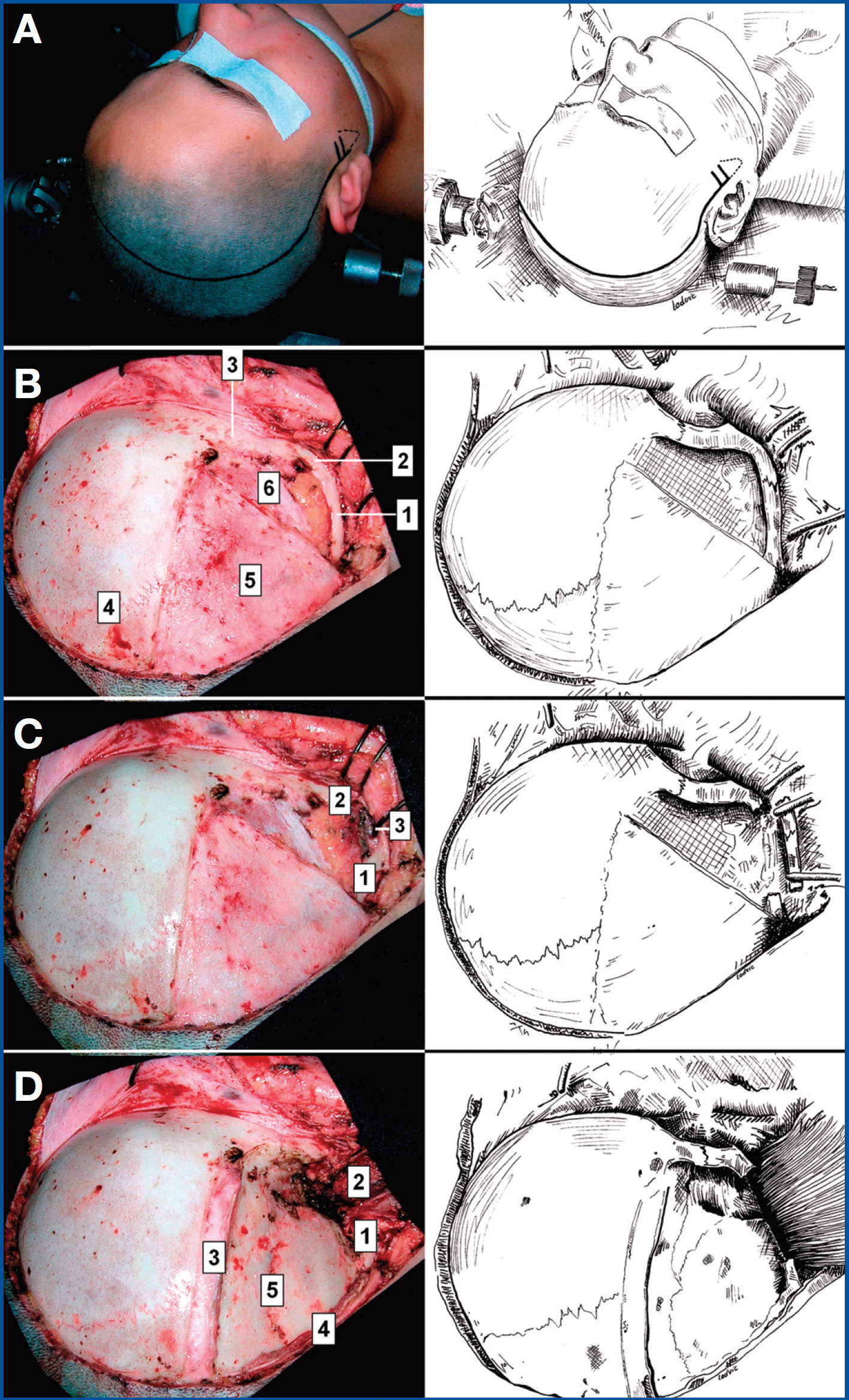 A subgaleal dissection is performed so that the fat pad is exposed above the temporal fascia (Fig. 1B). This corresponds to approximately one-fourth of the anterior temporal muscle and is located just anterior to the frontal branch of the superficial temporal artery. The incision penetrates the external layer of the temporal fascia and the interfascial fat, and proceeds further in this plane to protect the frontal branch of the facial nerve. The interfascial gap holds a vein, which runs perpendicularly to the incision and should be coagulated and cut. Exposure of the orbital rim superiorly and the zygomatic arch inferiorly is then followed by a subperiosteal exposure of the whole orbital rim, zygomatic arch, and posterior zygoma.

Section of the Zygomatic Arch

Reflection of the Temporal Muscle

The temporal muscle is separated from the cranium by retrograde dissection to prevent significant postoperative muscle atrophy (Fig. 1D). This procedure, described by Oikawa et al,24 consists of a dissection of the temporal muscle with a periosteal elevator going from inferior to superior, avoiding the use of monopolar cautery. At the level of the superior temporal line, a small muscle and fascial cuff is kept in place for muscle reattachment at the end of the procedure. The temporal muscle is thus reflected downward through the space left by the sectioned zygomatic arch. This exposes the floor of the middle fossa in its entirety.

A pterional (frontotemporosphenoidal) craniotomy is performed in the usual manner (third cut) (Fig. 2A). The amount of frontal and temporal bone to be removed will vary according to the type and localization of the lesion. Usually, 4 burr holes are placed. The first burr hole (key hole) is placed in the frontal bone, just above and posterior to the frontozygomatic suture. The second burr hole is located in the frontal bone, behind the orbital rim, close to the supraorbital notch. The third burr hole is made below the superior temporal line, at the level of the coronal suture. Finally, the fourth burr hole is positioned in the squamous temporal bone, just above the zygomatic arch. The greater sphenoid wing, as well as the squamous part of the temporal bone, is drilled until the tip and the lateral inferior dural border of the temporal lobe are completely exposed. Then, the orbital roof and lateral wall are extensively drilled so that a fine bone layer is created. This will allow easier sectioning for orbital osteotomy later. 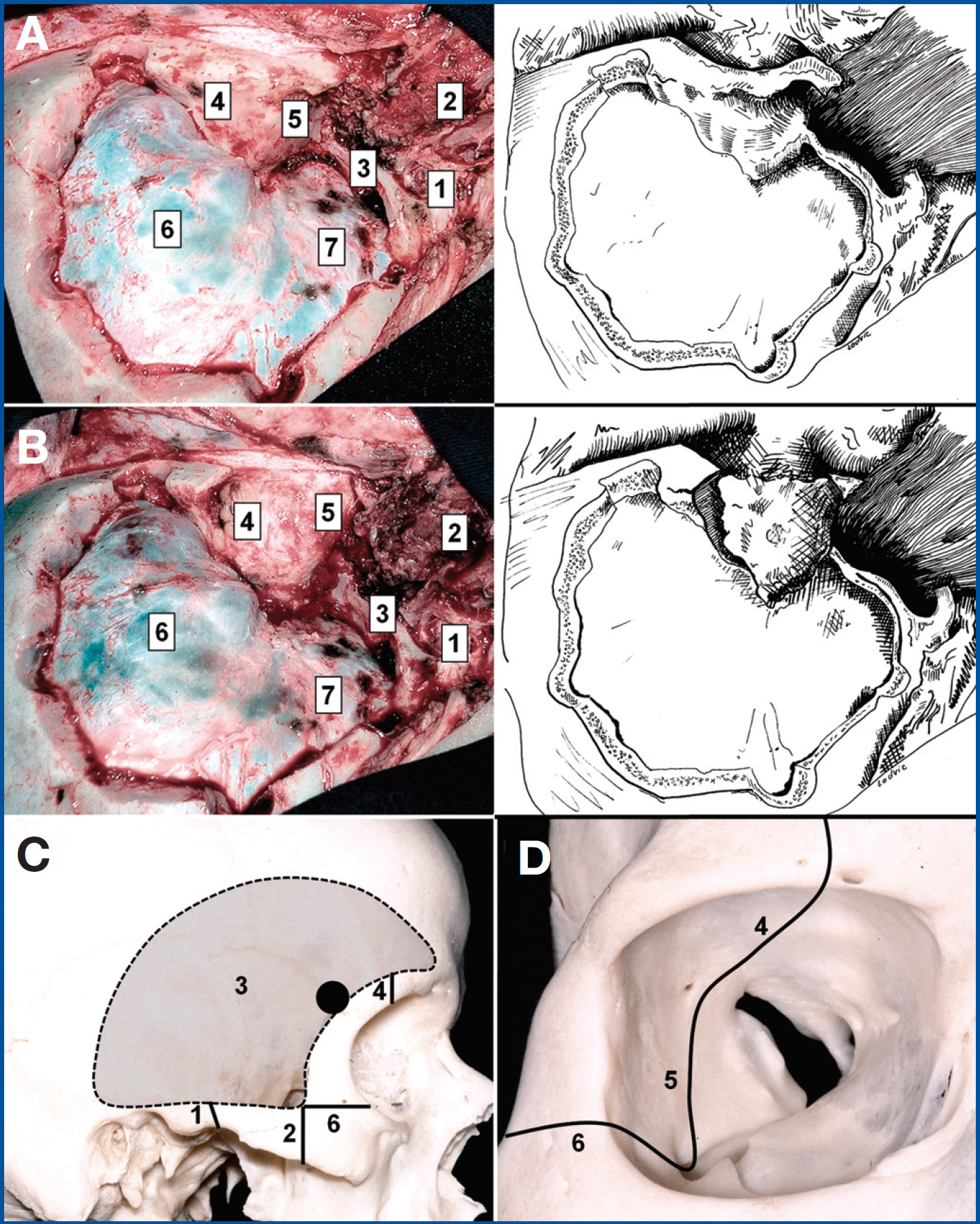 Three sections are required to remove the orbital rim, the orbital roof, and the lateral wall (Fig. 2B). Before that, the anterior two-thirds of the periorbita must be freed on the superior and lateral orbital walls to allow depression of the orbital contents. Thus, the orbital rim is cut 1 cm lateral to the frontal medial edge of the craniotomy, so that a bone step is left to support the replacement of the bone flap at closure. This cut extends backward over the orbital roof for approximately 3 cm (fourth cut), and changes direction toward the inferior orbital fissure through the lateral orbital wall (fifth cut). Osteotomy is completed by cutting the orbital rim from just above the union of the zygomatic arch and the zygoma up to the inferior orbital fissure (sixth cut). At this point, extreme care must be taken when separating the periorbita and orbital rim from the orbital walls, so as to prevent exposure and release of periorbital fat. The periorbita is usually most firmly attached to the bone at the level of the frontozygomatic suture. Likewise, special attention must be given to the supraorbital nerve. Before proceeding with the dissection, the bone gap through which it becomes superficial should be unroofed, particularly when there is a foramen rather than a notch.

Surgical closure is performed following a sequence that is reverse in order to the approach applied. This means that the orbital bone is to be first replaced and secured to the cranium, followed by the frontotemporosphenoidal plate. Next, the temporal muscle is sutured to the cuff left for that purpose, and, lastly, the zygomatic arch is replaced and secured to the cranium. There are many bone-fixing materials available that can assist in preventing subsequent twisting. However, we have obtained excellent cosmetic results with nonabsorbable sutures (e.g., silk).

The 3-piece technique was described or suggested before the present work.5,10,13 The original 3-piece approach described herein constitutes a modification of the 2-piece approach described by Zabramski et al.5 By sectioning the zygomatic arch, a 3-cm-long free segment is obtained. This operation, as recommended by Delashaw et al,10 keeps the attachment of the masseter muscle in place at the zygomatic arch. In this manner, after being reflected from the cranium, the temporal muscle is mobilized inferiorly, and the already sectioned zygomatic arch is pushed down. This provides good basal exposure of the middle fossa floor, and secures exposure of the orbital lateral wall up to the level of the inferior orbital fissure, which is necessary for the orbitozygomatic osteotomy (Fig. 2C). No extra time was needed to perform the 3-piece approach, given the fact that the number of surgical cuts and the extension of the dissection were both similar to the aforementioned variants. Moreover, we do not consider that the 3-piece craniotomy produces worse cosmetic results compared with its 1- and 2-piece counterparts (Fig. 3). Several complications depicted in 3-piece orbitozygomatic craniotomy (frontotemporal branch of facial nerve lesion, supraorbital nerve lesion, postoperative soft tissue edema in the frontoorbital region) are similar to those described for 1- or 2-piece orbitozygomatic craniotomy. Regarding our results, only 1 patient presented a transitory palsy of eyebrow elevation that resolved postoperatively in 1 week. No damage to the supraorbital nerve was observed during dissection, and soft tissue edema always disappeared by approximately the fifth day after surgery. 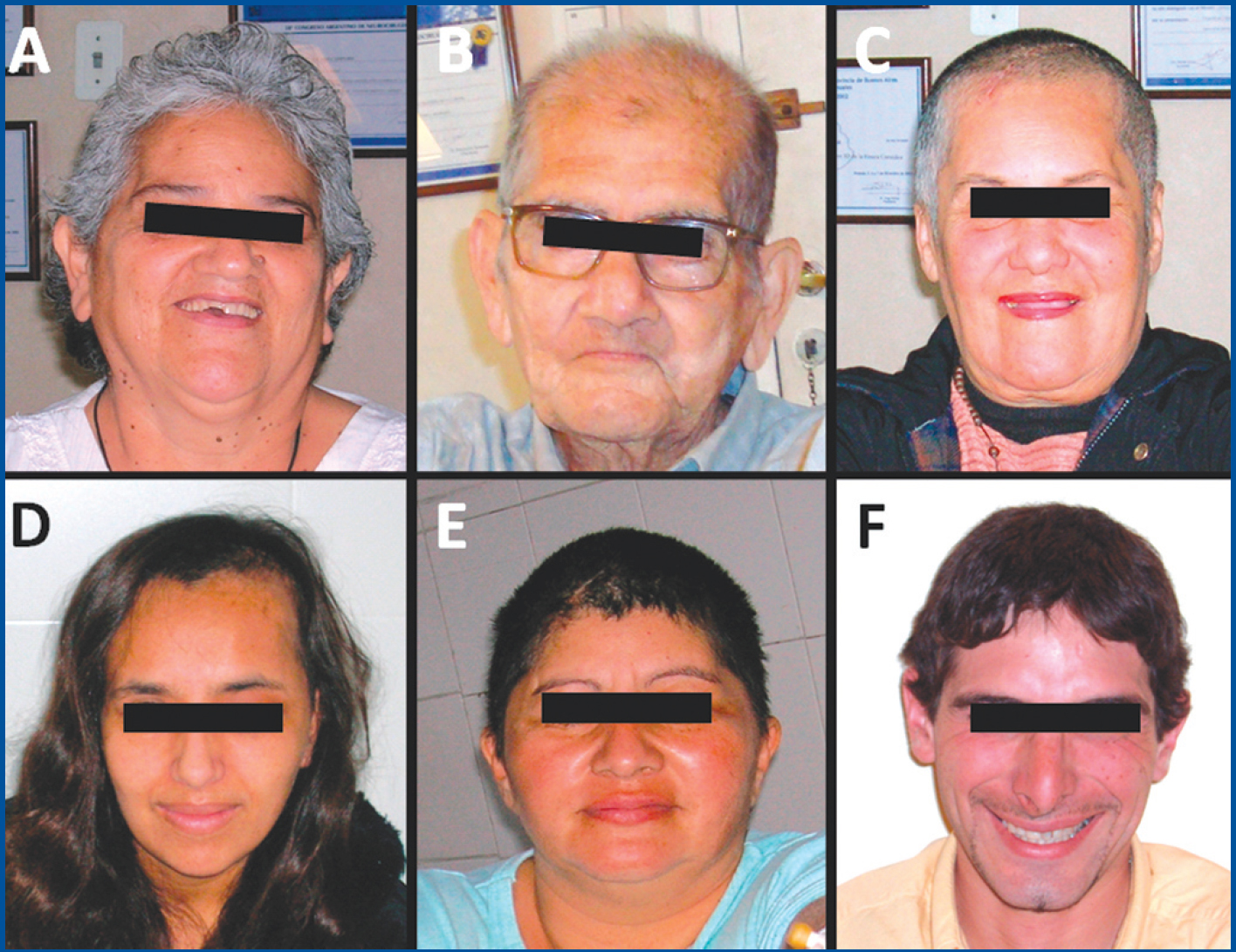 Orbitozygomatic craniotomy offers a greater angle of view and enough space for the operation both horizontally and vertically.27 Removal of the orbital part improves the angle of horizontal attack, which is particularly useful when using a subfrontal or transsylvian route. Additionally, removal of the zygomatic arch, lowering the temporal muscle below the level of the middle fossa floor, improves the angle of vertical attack, which proves particularly useful when using a pretemporal route. Gonzalez et al,28 comparing the extended and the conventional orbitozygomatic craniotomy, suggested that when the approach is extended anteriorly (maxillary extension), the increase of the working area is so small that it is worthless. Moreover, as demonstrated by Schwartz et al,29 the greatest advantage of the orbitozygomatic approach in terms of increased exposure is achieved through orbital osteotomy. Thus, the authors think that increasing the extent of bone removal anteriorly to the zygomatic arch provides no greater basal exposure and is scarcely useful (Fig. 2C). Nevertheless, the approach described in this article differs basically in the extent of bone removal compared with the “conventional” orbitozygomatic craniotomy, and this fact may determine some variations in surgical exposure.

The Neurosurgical Atlas is honored to maintain the legacy of Albert L. Rhoton, Jr, MD.