OBJECTIVE: To evaluate the anatomic aspects of the diaphragma sellae and its potential role in directing the growth of a pituitary adenoma.

METHODS: Twenty cadaveric heads were dissected and measurements were taken at the level of the diaphragma sellae.

RESULTS: The diaphragma sellae is composed of two layers of dura mater. There is a remarkable variation in the morphology of the diaphragm opening. The average anteroposterior distance of the opening was 7.26 mm (range, 3.4–10.7 mm) and the average lateral-to-lateral distance was 7.33 mm (range, 2.8–14.1 mm).

CONCLUSION: The variability in the diameter of the opening of the diaphragma sellae could explain the growth of pituitary tumors toward the cavernous sinus or toward the suprasellar region.

The pituitary gland is located near the center of the head, supported by the sella turcica, at the cerebral surface of the body of the sphenoid bone. The diaphragma sellae forms the roof of the sella turcica (27). A combined wall of dura mater and bone protects the anterior, inferior, and posterior surfaces of the pituitary gland, whereas the lateral and superior portions are protected by dura mater only. The dural layer facing the lateral portion of the gland is single, but a double-layered dura covers all other surfaces. The diaphragm is the dural sheath that partially covers the superior surface of the gland, having a medial opening to transmit the pituitary stalk. There are several anatomic studies focusing on the dural walls of the cavernous sinus and sellae (3, 8, 9, 11, 24–28, 31, 33–35), but very little has been written about the diaphragma sellae (10, 12, 18). Furthermore, many articles have been written about identifying markers of pituitary tumor invasiveness (13, 14, 32) and many others have been written about magnetic resonance imaging diagnosis of pituitary tumor invasion (6, 7, 16, 17, 21), but no explanation exists regarding the reason why some tumors grow laterally toward the cavernous sinus and others grow superiorly toward the chiasmatic cistern. The aim of this study was to analyze the anatomic aspects of the diaphragma sellae that may have a potential role in directing the growth of sellar tumors.

Twenty formalin-fixed, silicon-injected adult cadaveric heads were analyzed in this study. The brain and its skull covering were removed, exposing the skull base. The limits of the diaphragm were established as 1) anteriorly, the dural insertion at tuberculum sellae; 2) posteriorly, the dural insertion at the dorsum sellae; and 3) laterally, the point where the medial wall of the cavernous sinus meets its superior wall (Fig. 1). The measurements were taken with a caliper (accuracy 0.02 mm; Draper, Tokyo, Japan) (Fig. 2). 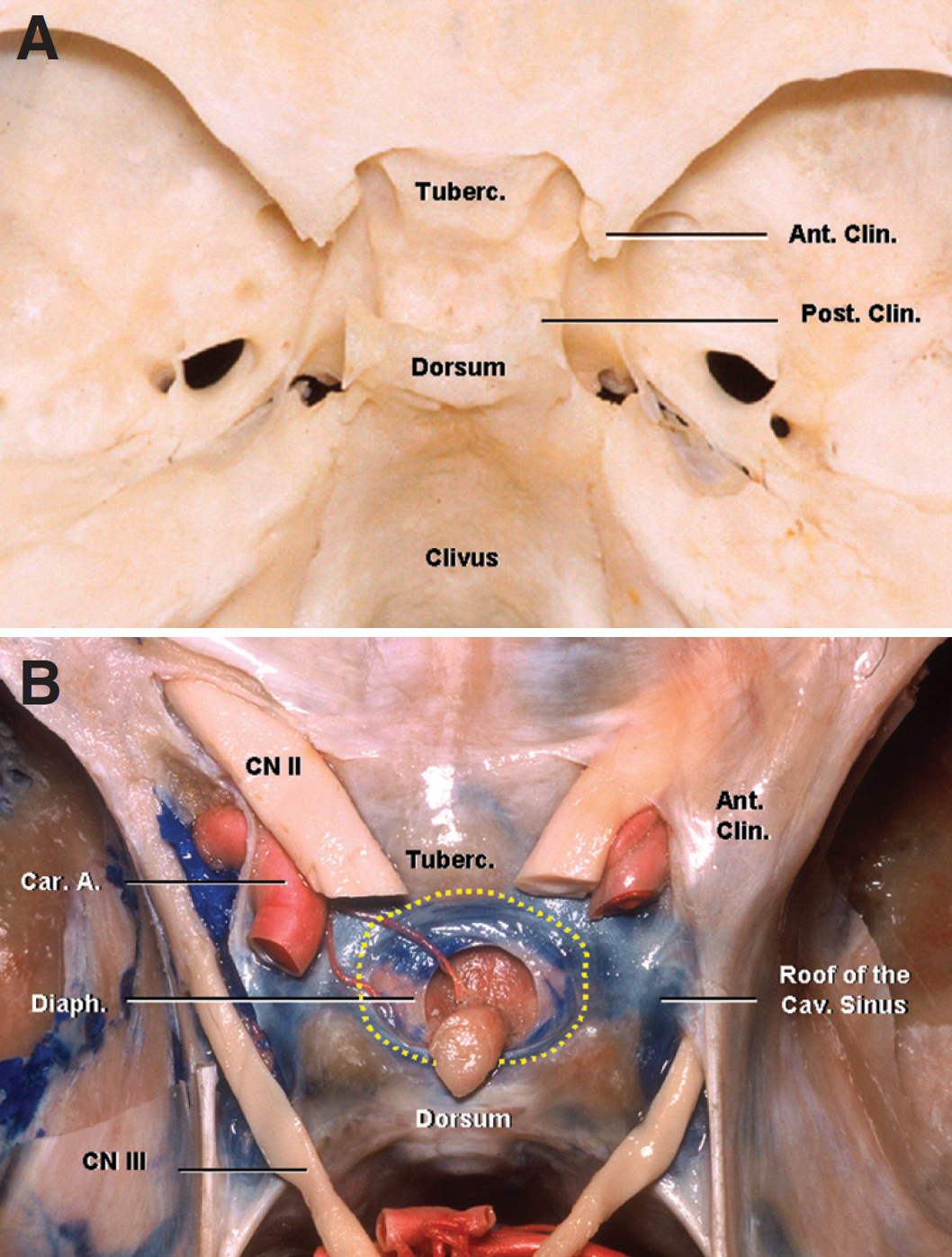 Figure 1. Superior view showing the skull base. A, osseous relationships of the skull base are demonstrated. The diaphragm is located in the middle fossa between the tuberculum and dorsum sellae. B, dural relationships of the skull base are shown. The diaphragma sellae is located in the center of the skull base; it continues anteriorly with the dura mater that covers the planum of the sphenoid bone and the anterior cranial fossa, posteriorly with the dura mater covering the dorsum sellae and clivus, and laterally with the superficial layer of the roof and lateral wall of the cavernous sinus. A., artery; Ant., anterior; Car., carotid; Cav., cavernous; Clin., clinoid; CN, cranial nerve; Diaph., diaphragm; Post., posterior; Tuberc., tuberculum; yellow dotted line, limits of the diaphragma sellae. (Images courtesy of AL Rhoton, Jr.) 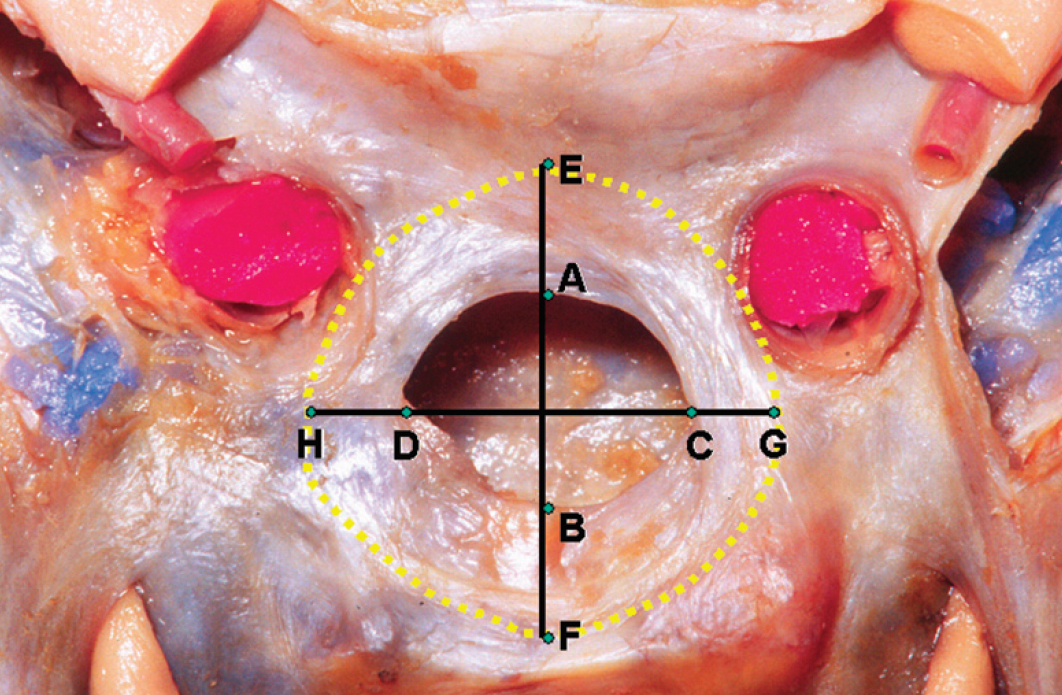 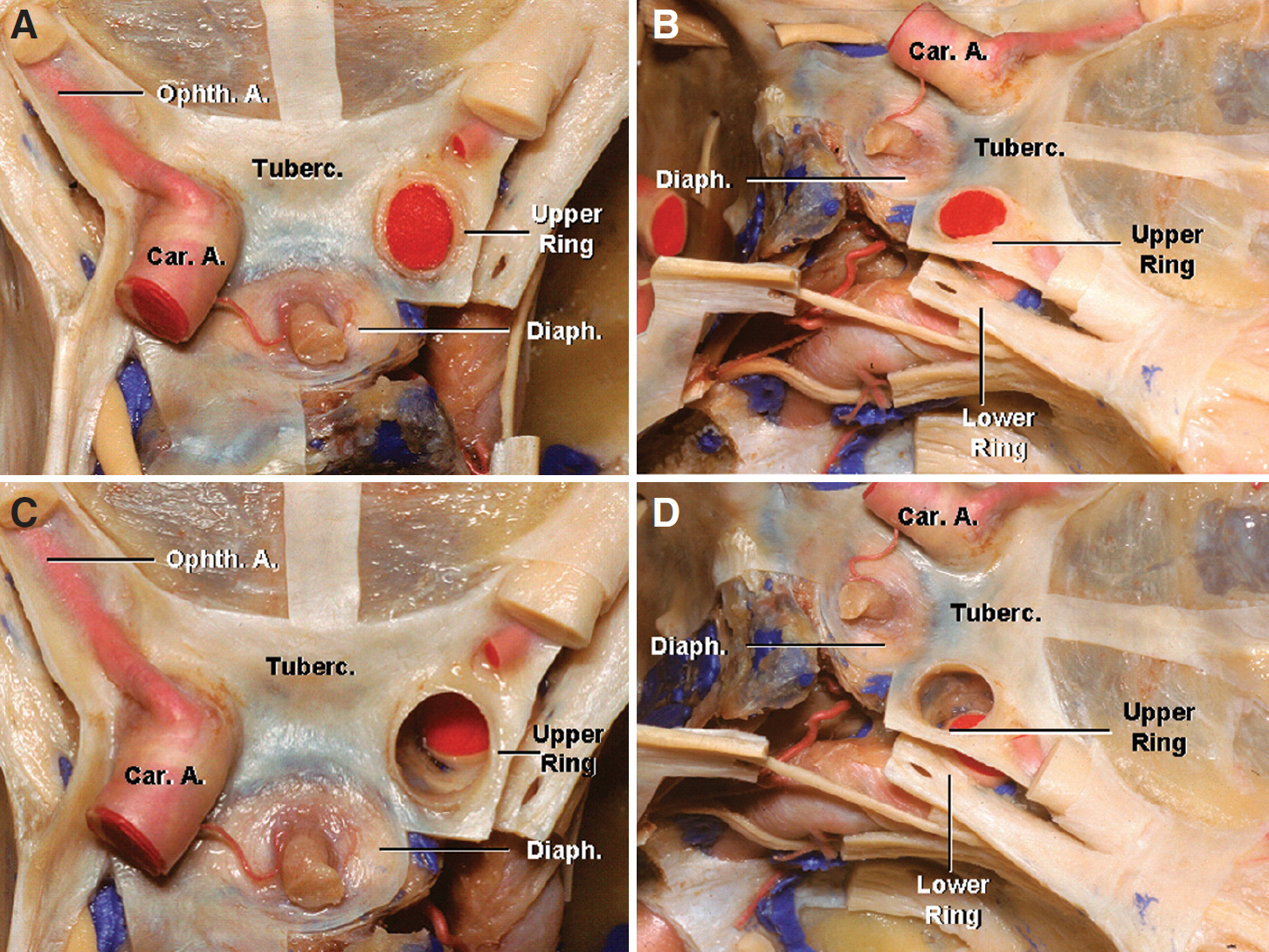 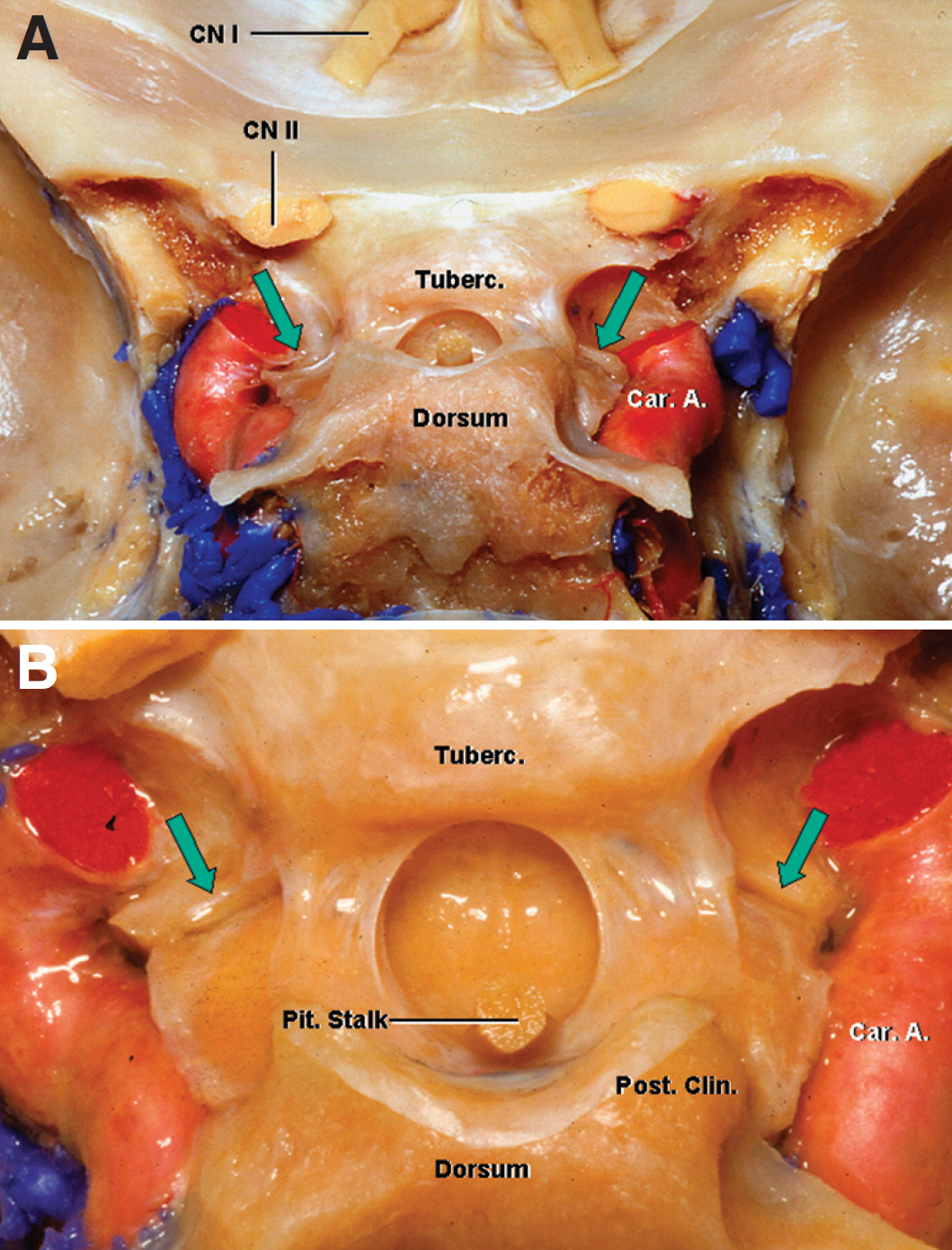 Figure 4. Specimen showing a large diaphragm opening and an empty sella. The pituitary gland is displaced inferiorly and laterally (green arrows). A, posterior view. B, superior view. Note that the opening starts at the level of the tuberculum sellae and finishes at the level of the dorsum sellae. A., artery; Car., carotid; Clin., clinoid; CN, cranial nerve; Pit., pituitary; Post., posterior; Tuberc., tuberculum. (Images courtesy of AL Rhoton, Jr.)

The pituitary gland is located in the sella involved by dura mater. Its anterior, inferior, and posterior surfaces are surrounded by a double-layered dura mater and sellar bone, which represent a strong barrier to the expansion of a sellar tumor. In contrast, the lateral and superior surfaces of the gland are covered only by dura mater, and both the lateral and superior walls have special features that can turn them into a less resistant path of growth to pituitary tumors. Different from all other dural coverings in the sellae, the dura covering its lateral walls, which comprise the sellar portion of the medial walls of the cavernous sinus, is formed by a single layer of dura (Fig. 5) (35). 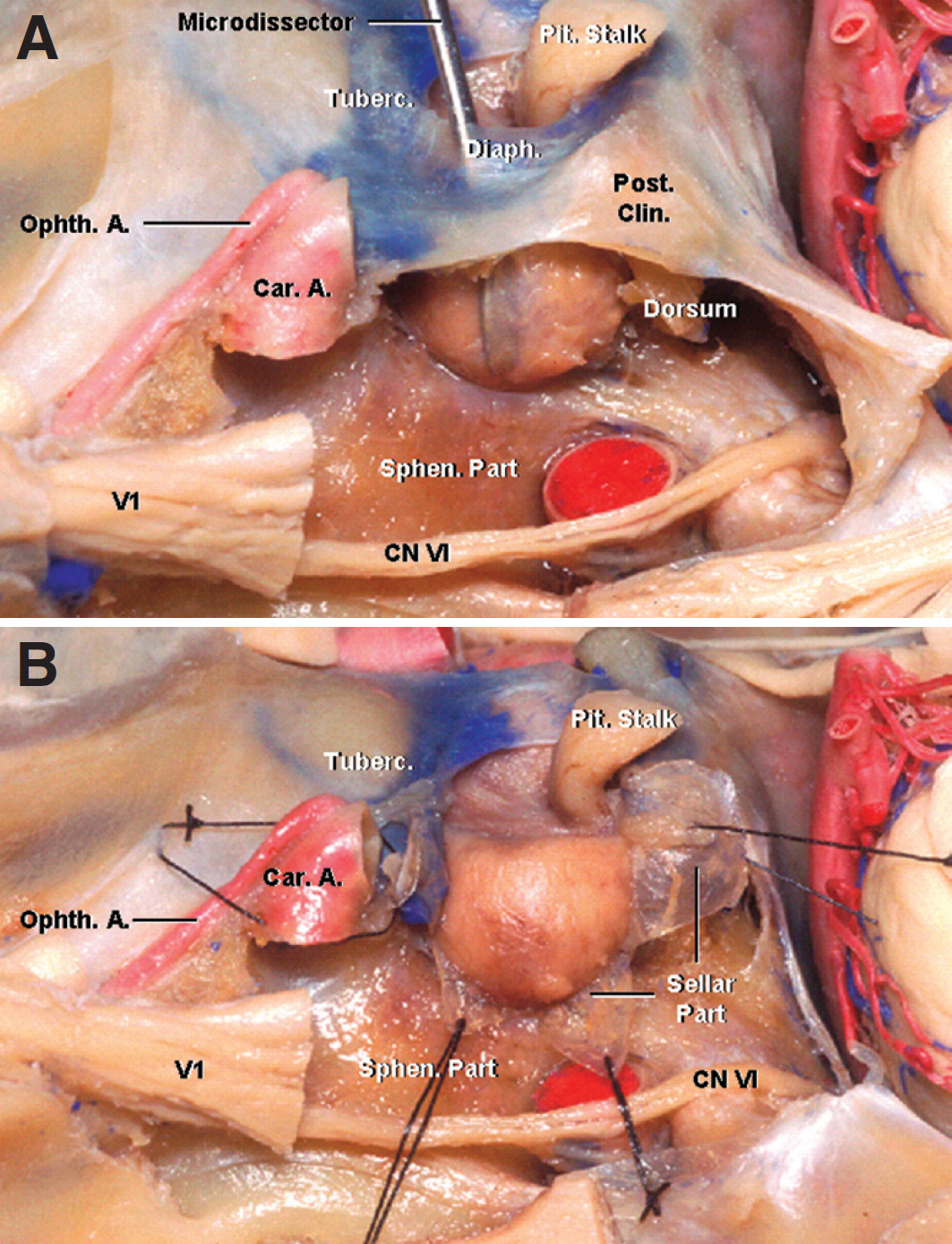 The questions of why some pituitary adenomas present an aggressive course, and especially why some may grow toward the cavernous sinus, have generated many different hypotheses. Nevertheless, the factors involved in growth and invasiveness are not yet well understood (2). Much has been written about the value of cellular proliferation markers for the identification of subgroups of adenomas prone to invasiveness, including Ki-67, MIB-1, matrix metalloproteinase-9, and cathepsin B, with conflicting results (13, 14, 20, 32, 36–38). Some suggest that cavernous sinus invasion is more frequent in specific groups of adenomas, such as growth hormone-secreting tumors, but the results are inconclusive (13, 19). Yokoyama et al. (36) suggest a defective medial wall as the most probable reason for cavernous sinus extension. However, according to their work, these authors consider the cavernous sinus medial wall and the pituitary capsule to be the same structure. According to previous studies by our group, the pituitary capsule is a well-defined structure that involves the pituitary gland and is different from the medial wall (35). Other authors agree with this idea (5). Oldfield (23) proposed that the medial wall is pierced by veins that link the pituitary gland to the cavernous sinus, suggesting that these are susceptible points along these walls. Some reports support the notion that the medial wall is entirely absent (9, 15). In a dedicated anatomic study of the medial wall, including 44 cavernous sinuses, it has been observed that this wall is present and continuous in 100% of cases (Fig. 5) (35).

The role of the diaphragm opening in directing the power vectors along this area has been addressed previously (10, 12, 29). A similar rationale has been proposed to explain empty sellae syndrome (1, 4, 10, 27). In these cases, the presence of a competent diaphragm represents a barrier against the pulsatile action of the cerebrospinal fluid on the sellar contents. In Figure 4, it is possible to observe one specimen with a large opening of the diaphragm, an empty sellae, and lateral extension of the gland toward both cavernous sinuses.

Although there are many studies describing the anatomy around the sellae, none addresses the influence of the dural layers on the direction of growth of a pituitary adenoma. This article demonstrates, from an anatomic point of view, that the only one among the six sellar walls surrounding the pituitary gland that consistently varies with respect to structure is the superior wall, and that this variation depends directly on the size of the diaphragma sellae. Thus, although the diaphragma sellae is composed of two dural layers and theoretically is more resistant than the single-layered dura of the lateral surface of the gland, it presents the infundibular opening at its center, which can, at times—depending on its dimensions—be truly incompetent. The resistance of this sector is therefore dependent on the anatomic variant of the diaphragm opening presented in a given patient. Individuals with small diaphragm openings, which block the tumor enlargement superiorly, would have this growth directed along the least resistant path, the sellar border with the cavernous sinus. Others, harboring large, incompetent diaphragm openings, would have superiorly directed tumor growth (Fig. 6). 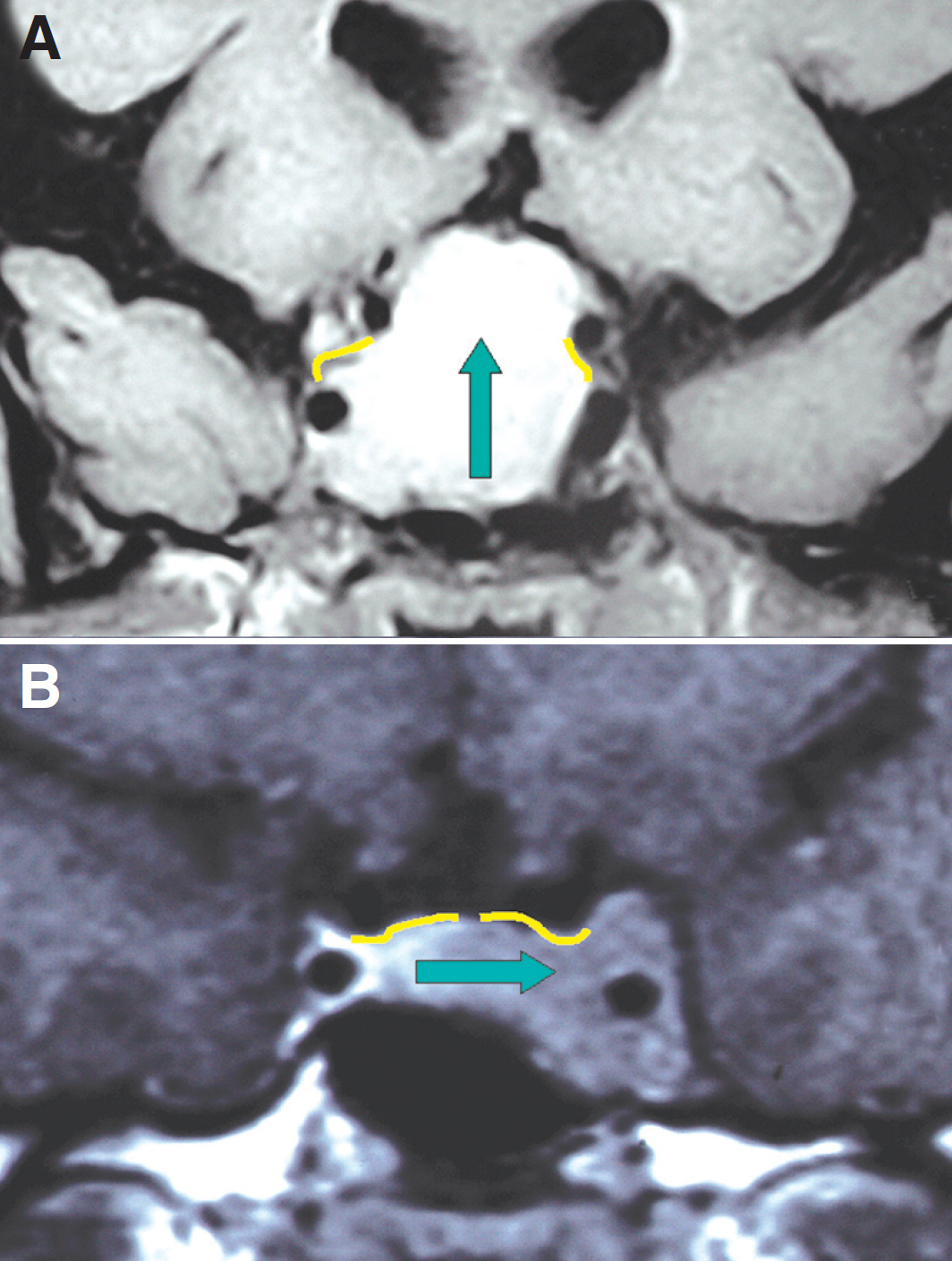 The anatomic variability of the diaphragm opening, added to the special dural composition of the medial wall of the cavernous sinus, may explain the pattern of growth of pituitary tumors.

Content from Campero A, Martins C, Yasuda A, Rhoton AL, Jr. Microsurgical anatomy of the diaphragma sellae and its role in directing the pattern of growth of pituitary adenomas. Neurosurgery 2008;62:717–723. doi.org/10.1227/01.neu.0000317321.79106.37. With permission of Oxford University Press on behalf of the Congress of Neurological Surgeons. © Congress of Neurological Surgeons.

The Neurosurgical Atlas is honored to maintain the legacy of Albert L. Rhoton, Jr, MD.