Meningiomas: What the Patient Needs to Know

What Is a Meningioma?

A meningioma is a tumor that develops from the protective membranes (the meninges) surrounding the brain and spinal cord. These tumors push away and compress rather than invade the brain. Meningiomas are typically benign and account for 95% of benign brain tumors and approximately 30% of primary brain tumors (those tumors that originate in the brain, as opposed to those tumors that have spread from other parts of the body to the brain).

Meningiomas are generally well defined and conform to the space they inhabit, although a tumor—even though benign—can grow to invade surrounding muscle and bone. Most benign tumors do not invade normal surrounding brain tissue, and any abnormal neurological problem is generally the result of increased pressure and compression on the surrounding brain or nerves. 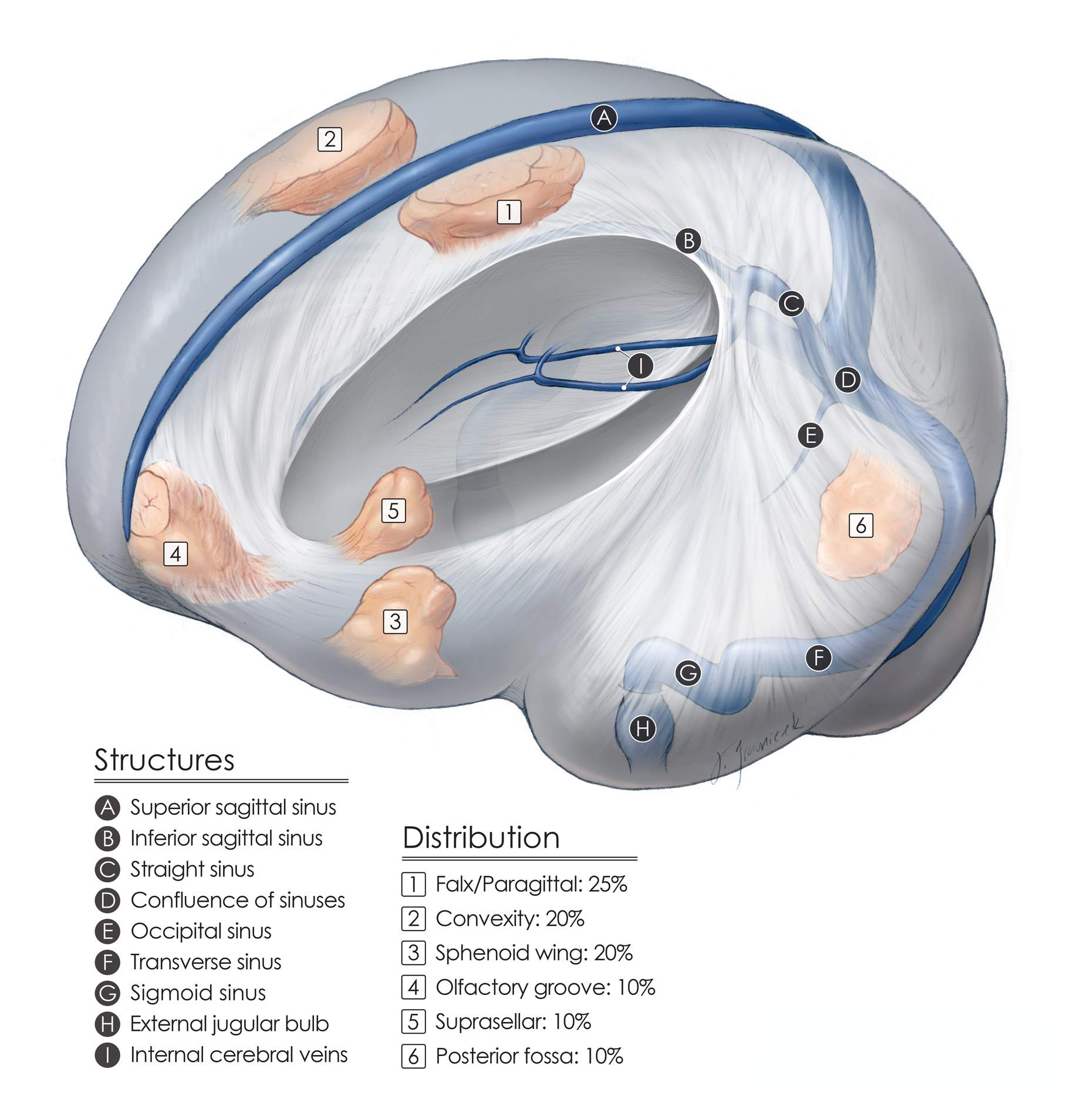 Figure 1. Distributions of meningiomas within the supratentorial space. 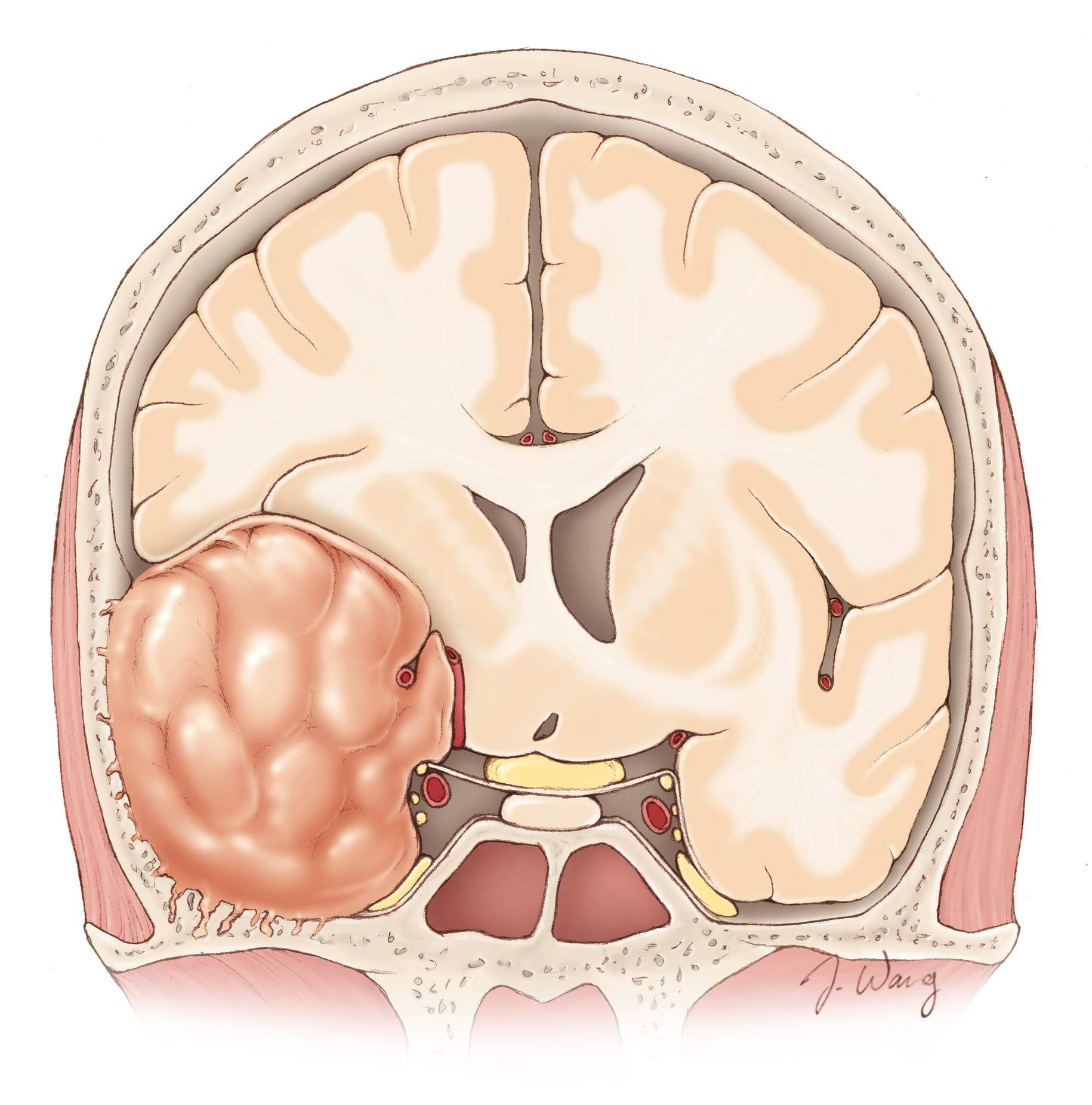 Figure 2. Cross-section of a large meningioma along the lateral sphenoid wing.

Who Is at Risk?

Women are at a higher risk than men, and adults are more prone to developing meningiomas than children. Diagnosis is most common among patients between the ages of 40 and 70 years, and less than 2% of cases reported occur in children.

The symptoms resulting from a meningioma depend on the size, location, and rate of growth of the specific tumor. Patients with a small meningioma are often asymptomatic.

When symptoms do occur, they are usually the result of an overall increase in intracranial pressure (such as headache or seizure) or from the pressure applied by the tumor on the specific nerves or normal brain tissue (such as visual deficits caused by pressure on the optic nerves).

Bcause meningiomas are usually very slow-growing tumors, symptoms can be subtle and evolve slowly with time. Thus, a patient might go undiagnosed for months or years before seeking medical attention.

Your physician has many methods available to aid in the diagnosis of a meningioma. He or she might integrate information from the patient's clinical history, physical examination, and/or radiological evaluations to eliminate other possible explanations and establish the correct diagnosis.

The first step is generally a neurological exam, in which the physician will test the patient’s vision, hearing, coordination, mental abilities, and reflexes. On the basis of these results, the physician will order 1 or more of a variety of tests, including the following.

Magnetic Resonance Imaging (MRI) to Exam the Brain in Detail

MRI allows the physician to see soft tissues in the head, including the potential tumor. A contrast dye might be used to specifically highlight abnormal structures within and around the brain.

A CT scan is used to differentiate structures, including tumors, on the basis of their density. Contrast dye might be used to highlight other structures (including the brain’s associated vasculature and abnormal tumors).

Angiography to Image the Brain's Vasculature

Angiography is often used preoperatively if the surgeon believes that major blood vessels are feeding the tumor or contained within the tumor. Angiography can be used as a chance to "glue" some of the vessels feeding the meningioma. This way, the amount of blood loss during surgery decreases.

If a tumor is found, a biopsy might be performed to collect a small sample of the tumor for testing and identification. Examination of the sample by a pathologist can confirm the diagnosis if necessary and classify the type of meningioma.

Tumor collection for biopsy usually takes place during a surgery to remove the tumor or might be performed in a procedure all on its own.

Because of the slow-growing nature of a meningioma, many physicians prefer to leave small asymptomatic tumors untreated. In such cases when no treatment is prescribed, the doctor will order periodic MRI (usually once every year) to monitor the tumor's growth.

When treatment is necessary, patients might have both surgical and nonsurgical options. These options include the following:

The surgical route is the most common method of treatment and the method of choice for most meningiomas. Because meningiomas originate from the membranes surrounding the brain, and not within the brain itself, they tend to be more clearly defined and easier to remove than infiltrative tumors like gliomas. The operation involves what is referred to as a craniotomy. The surgeon makes an incision in the scalp and will drill away and remove part of the skull to gain access to the tumor. Surgery specifics vary greatly depending on the tumor's size and location. 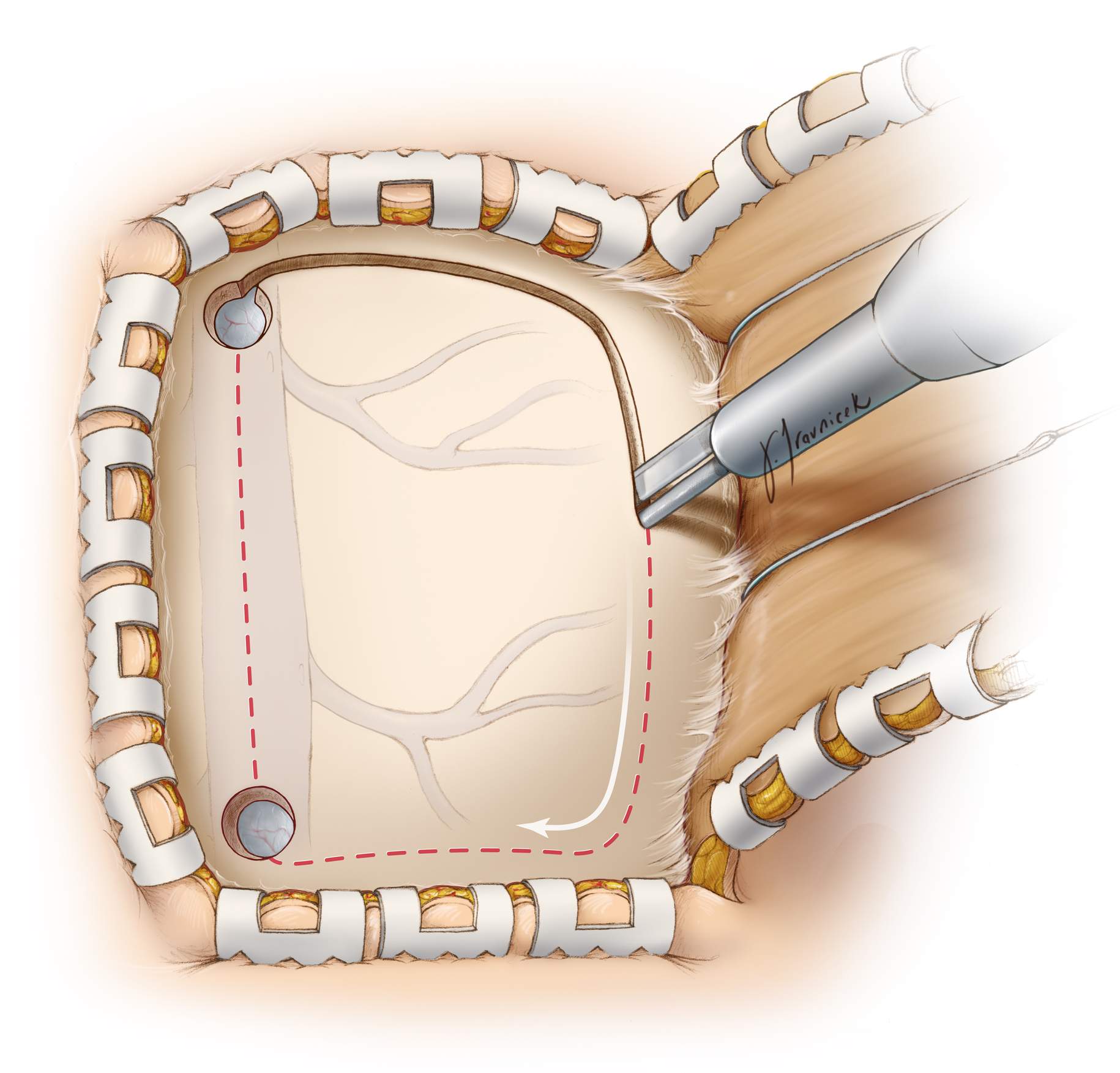 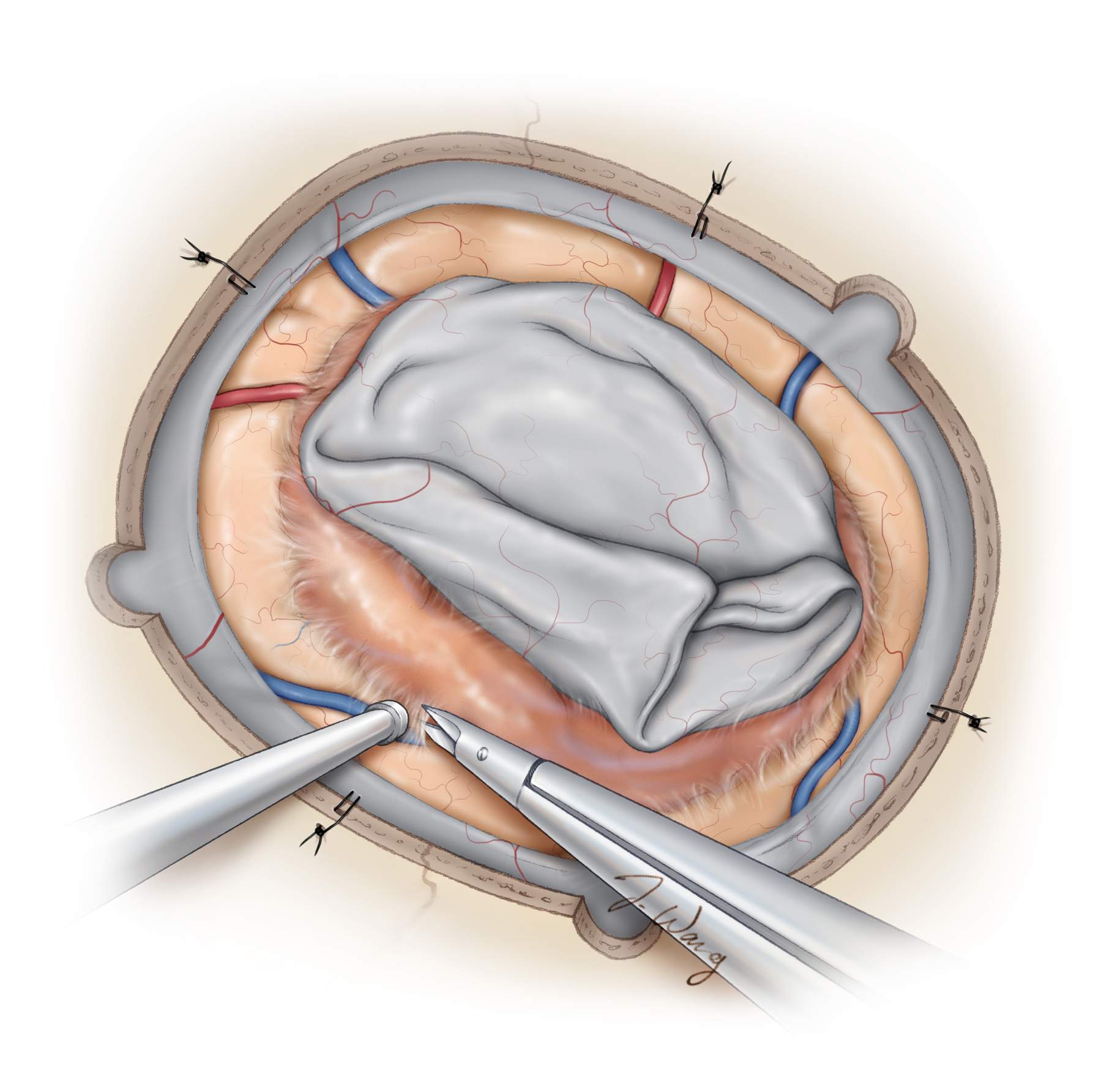 Meningiomas at the base of skull in close proximity to cranial nerves, or those that are near important blood vessels, are more difficult to remove, have higher complication rates, and may only be amenable to partial resection. In such cases where total tumor removal is not surgically possible, the patient is often observed periodically with MRI scans to carefully monitor the size of the residual tumor. Radiation therapy might be considered after surgery. Surgery along the skull base requires a neurosurgeon with special training in skull base surgery.

Possible risks of surgery include infection, bleeding, and additional neurological damage, including weakness and numbness.

Stereotactic radiosurgery can deliver higher doses of radiation more accurately by using precise computer imagery and multiple beams to target the tumor. It does not require any incision and is done as a single-session outpatient procedure. Unlike external-beam radiation, surrounding structures are not as prone to damage from the radiation treatment, and this method might be better for tumors near important brain structures.

Depending on the tumor size, grade, and location, your surgeon or oncologist might recommend radiation therapy even in cases when resection is thought to be nearly complete.

When complete tumor removal is not deemed feasible, your physician might prescribe a variety of medications to control the symptoms. Commonly prescribed medications include the following:

For patients with increased intracranial pressure due to blockage of cerebrospinal fluid flow (a condition known as hydrocephalus), your surgeon might also install a thin tube called a shunt to drain the extra fluid into the abdominal cavity, where it can be reabsorbed.

The prognosis depends on many factors, such as tumor grade (aggressiveness), size, and location, as well as the patient's age and overall health. In general, patients with a nonaggressive tumor in an easily accessible location are more likely to undergo complete tumor resection and thus have the best outcome. Younger patients also tend to fair better.

Few meningiomas are malignant, but those that are classified as such generally lead to poorer outcome than those classified as benign. They require radiation treatment after surgery.