What is a glioma?

A glioma is a form of brain tumor originating from the glia - the cells that surround and support the neurons of the central nervous system (CNS). These tumors start in the brain or spinal cord (a primary brain tumor), and while capable of spreading within the CNS, they are usually confined to the brain.

Gliomas can be either static/slow-growing (relatively benign) or fast-growing (malignant, cancerous). Malignant tumors are classified by the World Health Organization on a four-point scale according to how aggressive (fast growing, cancerous) they are: grade I tumors are the least malignant and are usually associated with long-term survival, while grade IV tumors are made up of rapidly reproducing and invasive cells.

Along with identifying the grade of tumor malignancy (aggressiveness), gliomas are also classified according to the type of cells from which they originate and the area of the brain in which they are located.

Astrocytes are star-shaped cells that perform an important role in nourishing neurons and regulating the biochemical balance of the brain. These types of tumors can occur at any age, but are most frequent among adults. There are two types of tumors arising from astrocytes:

Astrocytomas are the most common form of glioma (they are occasionally found in the spinal cord as well.)

Symptoms of an Astrocytoma

Like many other brain tumors, symptoms of an astrocytoma are typically due to the increasing pressure on or irritation of the surrounding normal brain. An enlargement of the head is not uncommon in younger children, where increased pressure may push outward on the developing skull.

The type and severity of symptoms manifested in each patient vary depending on tumor size and the area of the brain affected by the tumor.

Like all gliomas, the treatment for astrocytomas will vary depending on tumor size, location, and grade. Surgery is usually the first course of action, with the surgeon removing as much of the tumor as possible while attempting to avoid damage to the adjacent normal brain tissue. 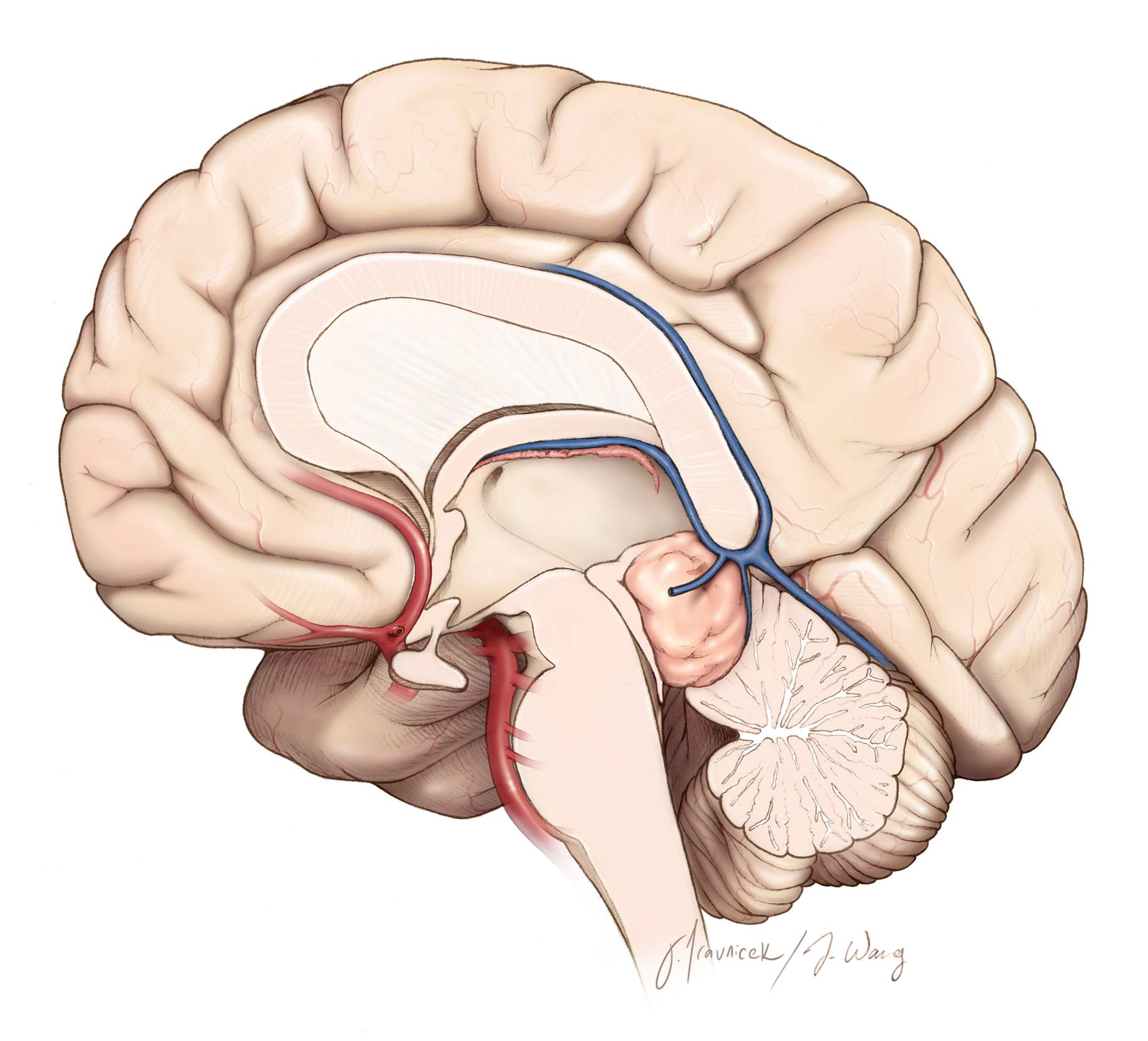 Cross section of an astrocytoma.

For low grade astrocytomas, surgery may be the only necessary course of action, as these forms of tumor are often benign and/or less invasive. Radiation may be employed in certain selected cases. 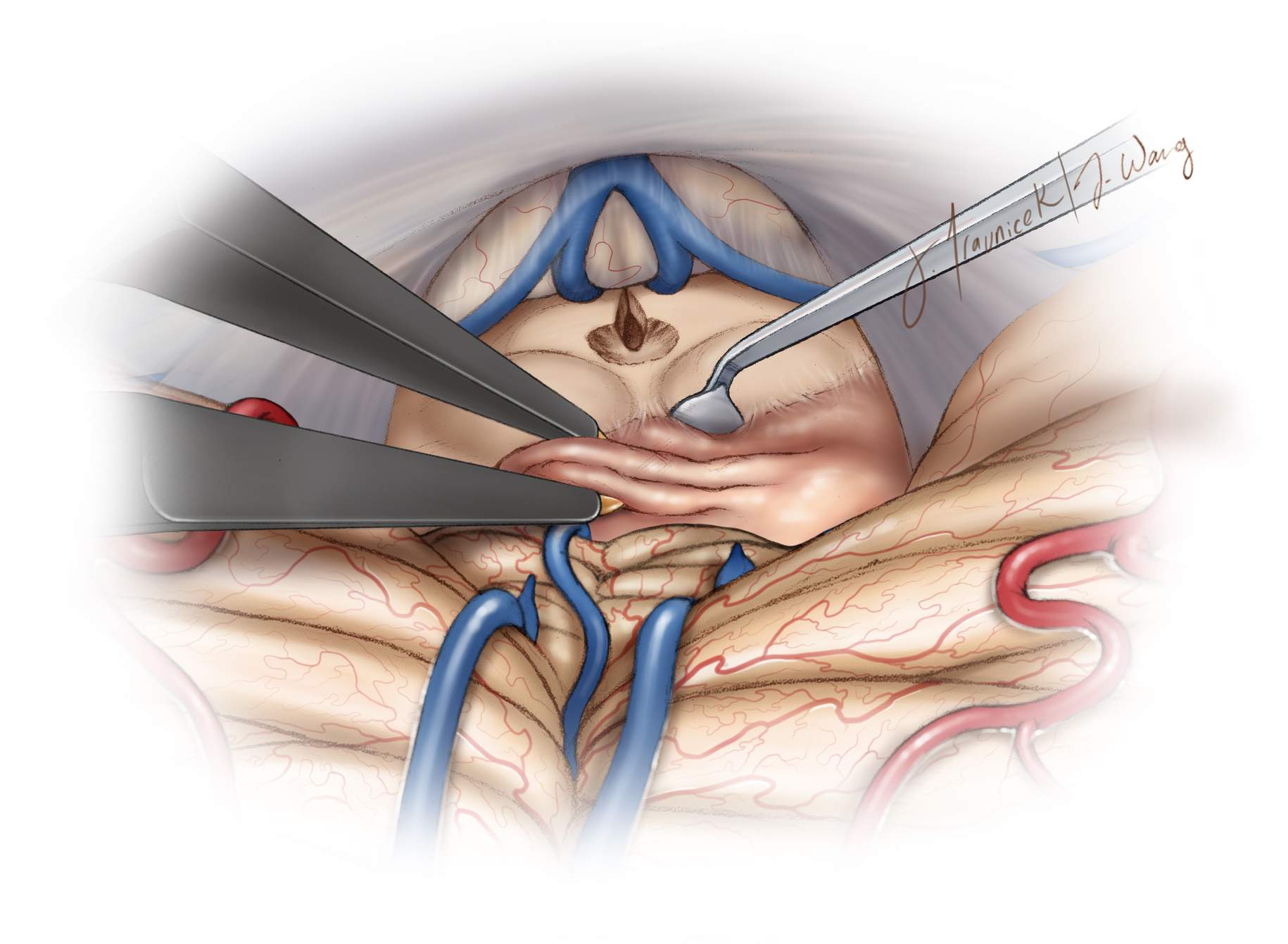 Surgical removal of an astrocytoma.

The aggressive nature of higher grade gliomas (grades III and IV) often makes total surgical resection impossible. Depending on the tumor’s location, a surgeon may attempt to remove as much of the tumor as possible, with radiation therapy and chemotherapy used in conjunction following surgery. Extent of tumor removal and application of radiation treatment have proven to extend the length of survival times.

In all cases, careful monitoring of the patient helps ensure quick action in the case of tumor recurrence or growth.

Prognosis is highly variable, depending on tumor grade, size and location. Factors such as age, extent of tumor removal through surgery and overall patient’s mental and functional status are often useful indicators of prognosis.

In general, grade I tumors have an excellent prognosis.

Grade III tumors are more aggressive and have a reasonable risk of recurrence. Some patients may live long with aggressive surgical resection and adjuvant (supplemental) treatments such as radiation and chemotherapy.

Glioblastoma multiforme (brain Cancer, often referred to as glioblastoma) is the most malignant and invasive type of astrocytoma (grade IV astrocytoma). It is unfortunately the most common form of primary brain tumor among adults.

As a particularly invasive form of cancer, glioblastomas will migrate away from the main tumor site into normal parts of the brain. Tentacle-like finger-shaped extensions of the tumor into the surrounding normal brain make total surgical resection extremely difficult since the tumor lacks clear boundaries. While this form of cancer may easily spread within the brain, it rarely spreads outside of the brain.

These tumors have a heterogeneous (non-uniform) composition. The tumor may contain pockets of dead cells and bleeding among the cancerous and normal tissue, alluding to the "multiforme" nature of this tumor. Sudden hemorrhage into the tumor may cause sudden neurological decline such as weakness or severe headaches.

Symptoms are often abrupt and seizures are common. Patients who are over 55 years in age may present with faster rates of symptom progression.

Damage to normal brain tissue and increased intracranial pressure may cause a variety of symptoms that can vary depending on the tumor size and location.

Common symptoms may include:

Depending on the position and size of the tumor, surgical removal of cancerous tissue may be the first step. The extremely diffuse nature of the cancer and its aggressive ability to infiltrate surrounding brain tissues make surgery less effective and total removal very unlikely. The surgeon should attempt to remove as much of the tumor as possible without damaging normal brain. Such tumor removal often helps relieve symptoms due to increased intracranial pressure (pressure inside the head.) Radiation therapy often follows surgery, and is also used when surgery is not possible.

Current treatments being tested include:

These treatments are still experimental and not in wide-scale use.

Prognosis is variable, depending strongly on factors like patient’s age, tumor size and location. The aggressive nature of glioblastoma multiforme generally translates to a poor prognosis, with mean patient's survival times usually no longer than 1-2 years.

Ependymomas are tumors that originate from the ependymal cells that line the cavities holding cerebrospinal fluid {CSF, brain fluid which fills the brain cavities (ventricles)} in the brain and spinal cord. This rarer form of glioma is found in higher percentages among children than adults. The adults that do develop this tumor type tend to do so within the spinal cord, while children tend to develop such tumors with a higher prevalence at the base of the brain. These tumor cells are capable of traveling via the CSF to other parts of the brain or spinal cord. 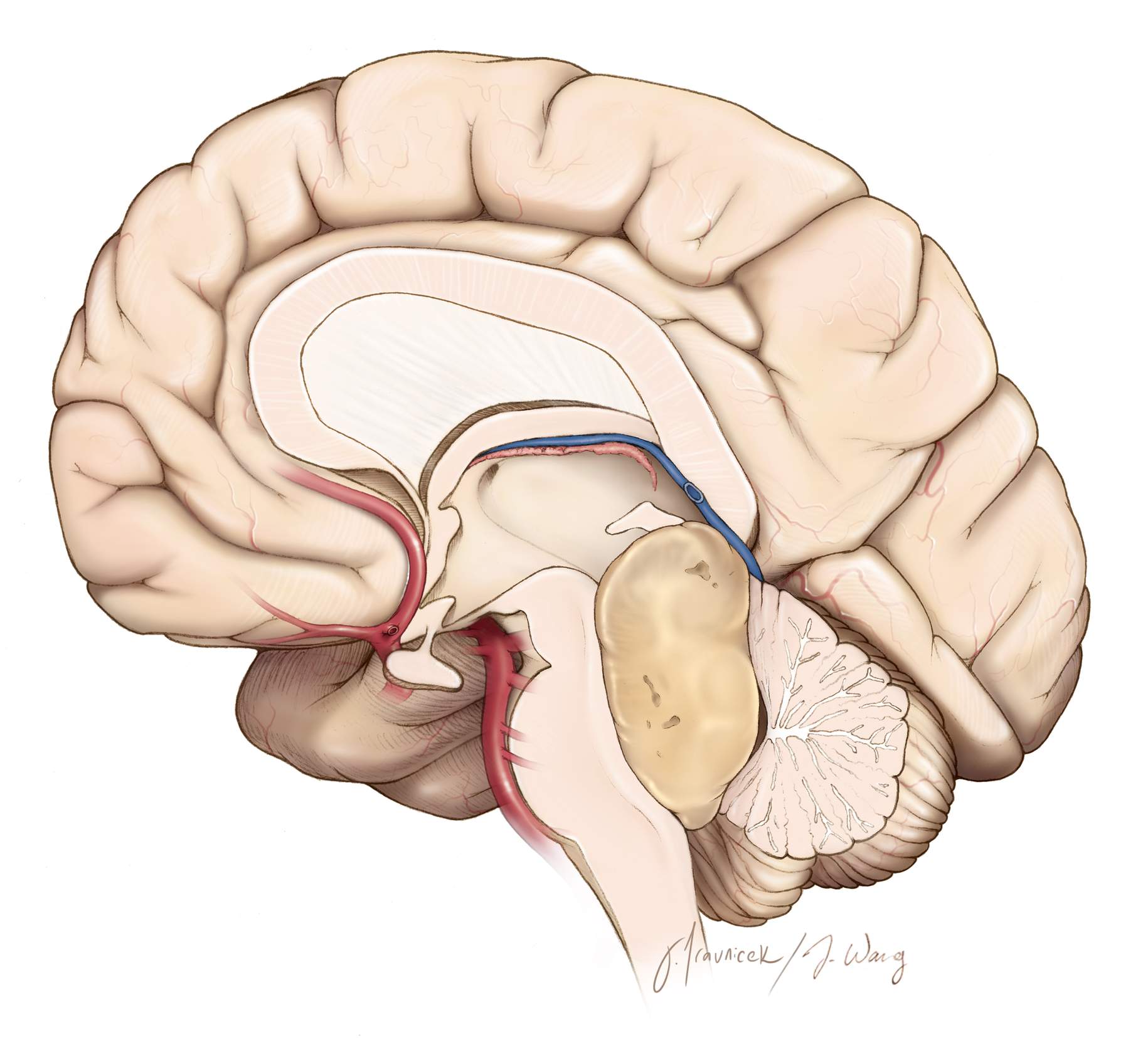 Cross section of an ependymoma.

Symptoms of an Ependymoma

Ependymomas have symptoms similar to those of astrocytomas and glioblastomas. The tumor may block the normal flow of CSF, resulting in build-up of fluid and increased intracranial pressure (hydrocephalus) and an enlargement of the skull (especially among children.)

The increased pressure on the brain can result in a variety of problems, including:

The type of treatment depends on the location and size of the tumor. For those tumors blocking the flow of brain fluid (CSF) removal of the tumor is the first line of therapy. If, despite tumor removal, CSF absorption or flow is still limited, a shunt (pastic tubing) may be inserted into the cavities of the brain (ventricles) during a second surgery to drain off the excess fluid into the abdomen and relieve the pressure in the brain.

In the case of surgery, the surgeon will attempt to resect as much of the tumor as possible without damaging normal adjacent brain. Complete removal is ideal; however, proximity to important structures may limit the surgeon's ability to remove all the tumor tissue. 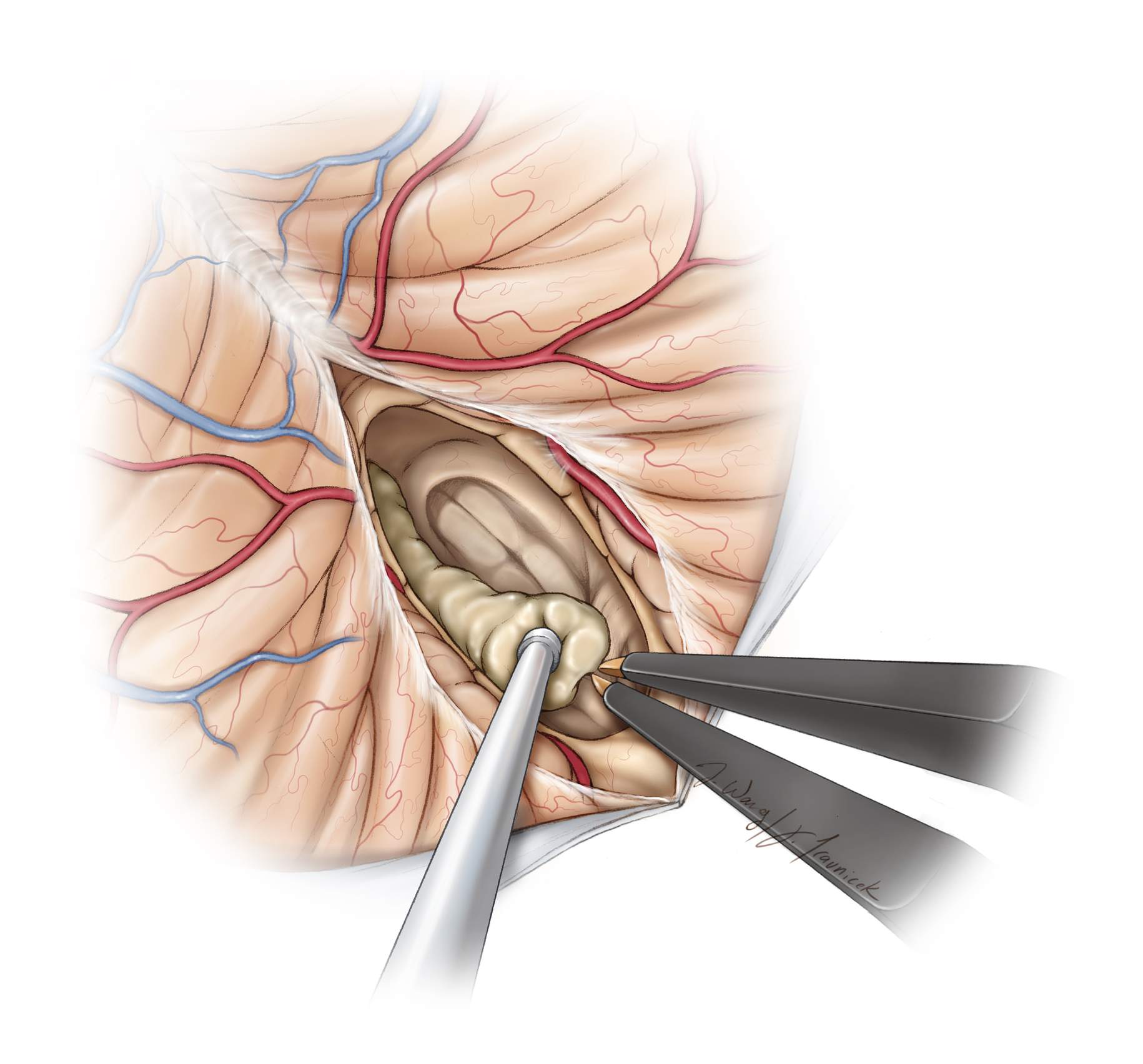 Surgical removal of an ependymoma.

Surgery may be followed by precisely targeted radiation therapy to kill the remaining tumor cells and control the tumor's growth. Chemotherapy may also be used, but is generally less effective in these forms of tumor.

Prognosis depends on many factors, including tumor size, grade and location as mentioned above in the case of astrocytomas. Ependymomas of the spinal cord are usually easier to treat and have a good prognosis. Brain ependymomas are often more difficult to treat.

Oligodendrocytes are a class of non-neuronal cells in the brain that produce myelin—a substance that coats neuronal processes (wires that connect brain cells together) to increase transmission speed. Oligodendrogliomas a the class of primary brain tumors arising from oligodendrocytes.

Tumor location may vary, but they are normally found in the cerebrum, the source of higher brain function. These tumors are classified as either grade II or the more malignant grade III. Low grade tumors may progress to higher grade tumors as the tumor cells continuously divide and evolve.

Symptoms are similar to those of other brain tumors and likewise depend on the tumor size and location. Symptoms are usually due to seizures, increased intracranial pressure and brain tissue damage caused by the tumor.

Like other gliomas, treatment options generally depend on the tumor's location, size, and grade. Surgical removal is commonly used to relieve pressure on the brain and reduce symptoms, but the diffuse nature of the tumor (especially high grade tumors) makes a complete tumor removal difficult. Surgery is usually coupled with postoperative radiation and chemotherapy. Chemotherapy may be especially effective in the treatment of oligodendrogliomas.

A significant factor in determining the prognosis is the presence of a specific genetic mutation known as a 1p/19q status. In such cases, tumor cells are missing sections of chromosomes 1 and 19; such tumors have better prognoses and respond more favorably to treatment.

Mixed gliomas refer to tumors composed of a variety of glial cell types in high proportions, including astrocytes and/or oligodendrocytes. Other forms of glioma may contain more than one cell type, but in general, those tumors are dominated by a single class of glial cell.

The characteristics of these cancers may vary depending on the overall cell composition, but most seem to occur in the cerebrum (site of higher brain functions) and their behavior is generally based on tumor grade.

Symptoms of mixed gliomas are similar to those of other brain tumors, and are likewise variable depending on tumor size and location.

Symptoms are usually due to increased intracranial pressure and damage to normal tissue caused by the tumor.

Standard treatment is similar to other gliomas of the same grade. Surgery is generally performed to excise as much of the tumor as possible without damaging normal neurological function. Surgery may help alleviate the symptoms caused by increased intracranial pressure.

Surgery is then often followed by radiation and chemotherapy (especially among higher grade tumors). The overall course of treatment will be determined by your doctor based on tumor grade, size, and location.

Prognosis is variable based on tumor grade, size and location. Younger patients and individuals with lower grade tumors tend to have longer survival times.