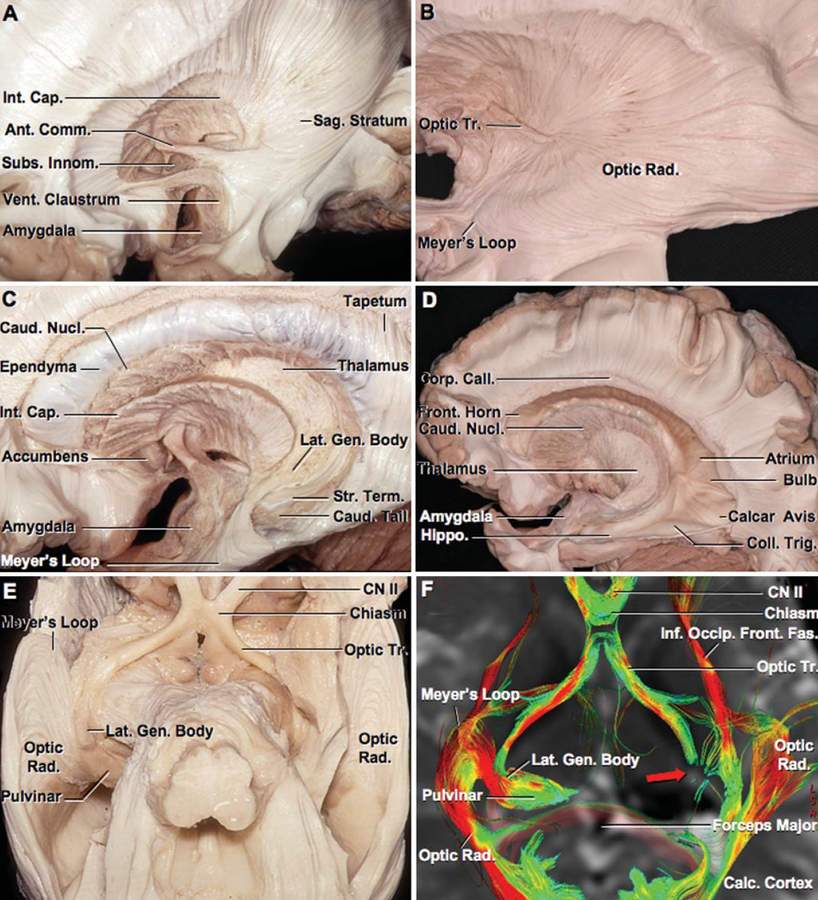 Optic Radiation. A, Removal of the medial fibers of the uncinate fasciculus exposes the amygdala. The ventral claustrum blends into the amygdala and substantia innominata. A bundle of anterior commissure fibers courses within the sagittal stratum. A group of horizontal fibers in the lower part of the anterior temporal lobe belongs to the inferior longitudinal fasciculus, although posteriorly, its differentiation from the fibers of the sagittal stratum is not possible by the fiber-dissection technique. B, Another specimen. Removal of the inferior occipitofrontal, inferior longitudinal, and uncinate fasciculi exposes Meyer’s loop, the anterior component of the optic radiations. Meyer’s loop passes anteriorly and laterally from the lateral geniculate body to reach the anterior edge of the roof of the temporal horn, where they curve posteriorly to join the middle and posterior part of the optic radiations passing toward the calcarine cortex. Meyer’s loop is situated in the sublenticular portion of the internal capsule, and the remainder of the optic radiations is located at the retrolenticular portion. C, Further dissection of the specimen shown in A. The fibers of the corona radiata and internal capsule have been removed and the caudal portion of the internal capsule preserved. The head of the caudate nucleus is situated medial to the anterior limb of the internal capsule, and the thalamus is medial to the posterior limb and retrolenticular portion of the internal capsule. The most anterior fibers of Meyer’s loop, which emerge from the lateral geniculate body and extend to the anterior limit of the temporal horn, have been preserved. The amygdala is located anterior and medial to Meyer’s loop. The tapetum is composed of callosal fibers that course deep to the fibers of the internal capsule and sagittal stratum, and it forms part of the roof and lateral wall of the lateral ventricles. The ependyma is the deepest layer of the lateral wall of the lateral ventricles. The tail of the caudate nucleus, and the stria terminalis, an efferent white matter pathway arising from the amygdala and ending in the septal region, have been exposed in the roof of the temporal horn. The accumbens nucleus situated medial to the substantia innominata, below the head of the caudate nucleus, and adjacent to the septal region, has been removed. D, Removal of the internal capsule, sagittal stratum, tapetum, and ependyma exposes the lateral ventricles. The caudate nucleus, with its characteristic C shape, has been exposed. The head of the caudate is positioned in the lateral wall of the frontal horn, the body in the lateral wall of the body of the lateral ventricle and atrium, and the tail of the caudate in the roof of the temporal horn. The thalamus is located within the C-shaped internal edge of the caudate nucleus. The anterior half of the thalamus is positioned in the ﬂoor of the body of the lateral ventricle, the posterior pole (pulvinar) of the thalamus in the anterior wall of the atrium, and the lower thalamic surface with the lateral geniculate nucleus is positioned medial to the roof of the temporal horn. The body of the corpus callosum forms the roof of the frontal horn, body, and atrium of the lateral ventricles. The medial wall of the atrium is formed by two prominences that are located one above the other. The upper prominence, called the bulb of the corpus callosum, overlies and is formed by the forceps major, and the lower prominence, the calcar avis, overlies the deepest part of the calcarine sulcus. The ﬂoor of the atrium is formed by the collateral trigone, a triangular area that bulges upward over the posterior part of the depth of the collateral sulcus. The floor of the temporal horn is formed medially by the hippocampus and laterally by the collateral eminence, an anterior extension of the collateral trigone that overlies the deep end of the collateral sulcus. The amygdala forms the anterior wall and anterosuperior part of the roof of the temporal horn. E, Bilateral exposure of the visual pathway, formed by the optic nerve, optic chiasm, optic tract, lateral geniculate body, pulvinar, and optic radiations. Meyer’s loop forms the anterior part of the optic radiation. F, Tractographic reconstruction of the visual pathways in a patient with a left pulvinar arteriovenous malformation (AVM). The nasal (medial) fibers of the optic nerve decussate to the contralateral side in the optic chiasm, and the temporal (lateral) fibers remain in the ipsilateral side. The ipsilateral temporal and contralateral fibers form the optic tract, which ends at the lateral geniculate body. The optic radiation or geniculocalcarine tract arises from the lateral geniculate body, passes through the retrolenticular portion of the internal capsule and ends in the calcarine cortex located on the medial surface of the occipital lobe. The anterior component of the optic radiation, Meyer’s loop, turns forward to the anterior edge of the roof and lateral wall of the temporal horn, and turns backward to reach the calcarine cortex. Fibers projecting from the pulvinar of the thalamus to the occipital cortex travel with the optic radiation. On the left side, a pulvinar AVM causes a decrease in the size of the thalamo-occipital fibers (red arrow). Tractography also shows some fibers of the inferior occipitofrontal fasciculus and the visual commissural fibers of the forceps major. (Images courtesy of E de Oliveira)