Identification of Sulci and Gyri 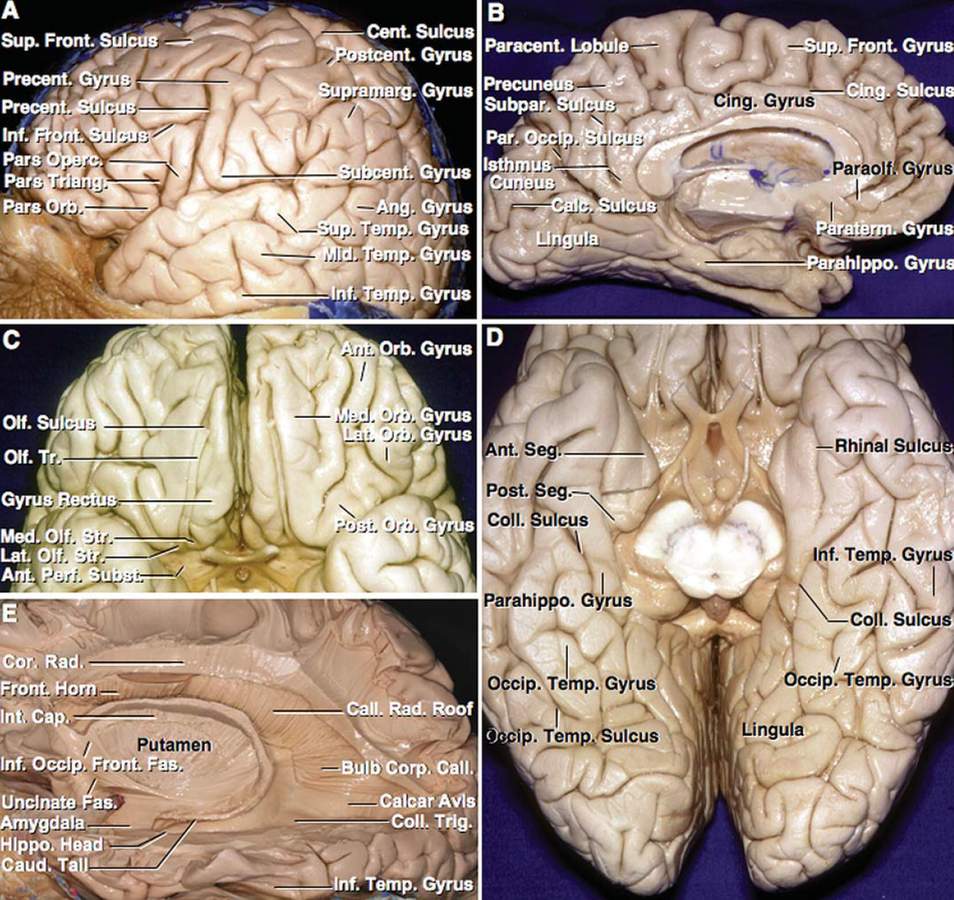 Identification of Sulci and Gyri. A, Lateral view, left cerebrum. The inferior frontal gyrus is formed by the pars orbitalis, triangularis, and opercularis and is limited superiorly by the inferior frontal sulcus. In this specimen, the inferior frontal sulcus is continuous and intersects with the precentral sulcus, and the superior frontal sulcus, which separates the middle frontal gyrus from the superior frontal gyrus, is an interrupted sulcus that does not intersect the precentral sulcus. The anterior limit of the precentral gyrus is formed by the precentral sulcus, which is frequently an interrupted sulcus, as seen in this specimen. The central sulcus lies between the pre- and postcentral gyri and is always continuous. The subcentral gyrus, which surrounds the lower end of the central sulcus, is visible on the lateral hemispheric surface and separates the central sulcus from the sylvian fissure. The postcentral sulcus, a commonly continuous sulcus, separates the postcentral gyrus from the superior and inferior parietal lobules. The intraparietal sulcus is also a commonly continuous sulcus, which frequently intersects the postcentral sulcus and separates the inferior from the superior parietal lobule. The inferior parietal lobule is divided into an anterosuperior part formed by the supramarginal, which arches over the upturned end of the posterior ramus of the sylvian fissure, and a posteroinferior part formed by the angular gyrus, which arches over the upturned end of the superior temporal sulcus. The lateral temporal surface is divided into three parallel gyri: the superior, middle, and inferior temporal gyri, by the superior and inferior temporal sulci. Although the superior temporal sulcus is largely continuous, the inferior temporal sulcus is commonly discontinuous, thus the middle and inferior temporal gyri are frequently formed by two or three gyral segments separated by sulcal bridges, giving the gyri an irregular discontinuous appearance. B, Medial surface of the left medial hemisphere. The majority of the medial surface of the frontal lobe is formed by the superior frontal gyrus and the cingulate gyri, which are separated by the cingulate sulcus. The paraterminal and paraolfactory gyri are located below the rostrum of the corpus callosum. The ascending ramus of the cingulate sulcus passes behind the paracentral lobule, the site of extension of the pre-and postcentral gyri onto the medial surface of the hemisphere. The medial surface behind the paracentral lobule is formed by the precuneus, cuneus, lingula, and posterior part of the cingulate gyrus. The precuneus is located between the ascending ramus of the cingulate sulcus, the parieto-occipital sulcus, and the subparietal sulcus, a posterior extension of the cingulate sulcus, which separates the precuneus from the isthmus of the cingulate gyrus. The cuneus is located between the parieto-occipital and the calcarine sulci, and the lingula is located below the calcarine sulcus. The parieto-occipital and calcarine sulci, always continuous sulci, join to create a Y-shaped configuration. The parahippocampal gyrus forms the majority of the medial surface of the temporal lobe, and is separated from the occipitotemporal or fusiform gyrus by the commonly continuous collateral sulci. The anterior part of the calcarine sulcus divides the parahippocampal gyrus posteriorly in a superior branch, which joins the isthmus of the cingulate gyrus, and an inferior branch, which blends into the lingula. C, Orbital surface of the frontal lobe. The olfactory tract extends along the olfactory sulcus on the lateral side of the gyrus rectus and divides at the edge of the anterior perforated substance into the G medial and lateral olfactory striae. The orbital surface lateral to the gyrus rectus is divided by an H-shaped sulcus into anterior, posterior, medial, and lateral orbital gyri. The posterior orbital gyrus is continuous with the transverse insular gyrus, and the lateral orbital gyrus is continuous with the pars orbitalis of the inferior frontal gyrus. D, Basal surface of the temporal and occipital lobes. The collateral sulcus separates the parahippocampal gyrus from the occipitotemporal gyrus, which forms the middle strip along the long axis of the basal surface. The occipitotemporal sulcus, which separates the occipitotemporal gyrus from the inferior temporal gyrus, is continuous on the right side and discontinuous on the left side. The rhinal sulcus forms the anterior and lateral margins of the uncus, and, in most cases, is not continuous with the collateral sulcus. The uncus is divided in an anterior segment, which contains the amygdala, and a posterior segment, which contains the hippocampal head. E, Fiber dissection of the left lateral cerebral hemisphere. The frontal horn, body, atrium, and temporal horn of the lateral ventricle have been exposed. The inferior frontal sulcus is located on the convexity at the deep level of the roof of the body of the lateral ventricle, which is formed by the callosal radiations. The supramarginal gyrus is located superficial to the atrium, and the middle temporal gyrus is located superficial to the temporal horn. The insular cortex, extreme and external capsules, and claustrum have been removed to expose the putamen. The internal capsule courses medial to the lentiform nucleus, the outer segment of which is formed by the putamen. The lower part of the uncinate and inferior occipitofrontal fasciculi, and the anterior part of the optic radiations have been removed to expose amygdala and head of hippocampus. The amygdala forms the anterior wall of the temporal horn. The caudate tail courses in the roof of the temporal horn. The collateral trigone bulges upward over the posterior end of the collateral sulcus and forms the ﬂoor of the atrium. The calcar avis, overlying the deep end of the calcarine sulcus, and the bulb of the corpus callosum, overlying the fibers of the forceps major, are exposed in the medial wall of the atrium. (Images courtesy of E de Oliveira)