Brain Aneurysms: What the Patient Needs to Know

A brain aneurysm is a small balloon-like swelling on the wall of one or more blood vessels supplying the brain. Symptoms usually do not occur until the aneurysm ruptures. Patients then experience an acute onset of severe headache, often described as “the worst headache of my life.” A person suspected of experiencing a brain aneurysm rupture should seek immediate medical attention. Treatment options include surgery, an endovascular procedure, or, for a small unruptured aneurysm, observation.

What Is an Aneurysm?

A brain aneurysm is a small balloon-like swelling on the wall of one or more blood vessels supplying the brain. It is a result of weakening in the wall of the blood vessel. This bulge is filled with blood and can cause neurological symptoms upon rupture or by pressing on nearby nerves and brain tissue. Brain aneurysms can also be called cerebral or intracranial aneurysms. 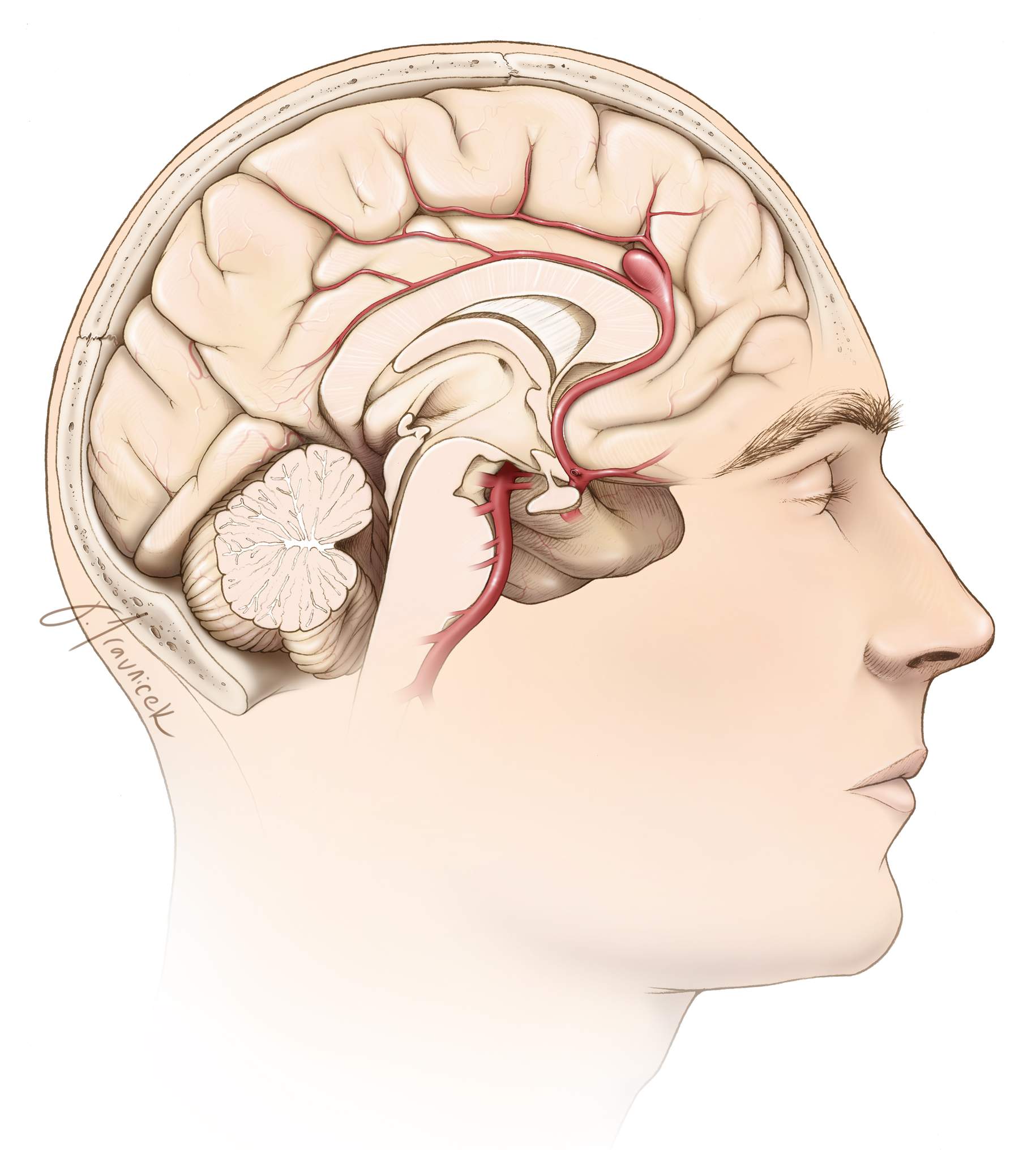 Brain aneurysms vary in location and type. Most of them occur at an arterial branch point and are located below the brain and at the base of the skull.

There are 4 major types of aneurysms:

Aneurysms can cause symptoms by pressing on nearby nerves and brain tissue. Pain above and behind the eye, numbness, weakness, and/or vision changes have been reported. However, most patients do not experience symptoms until the aneurysm ruptures. This rupture causes bleeding into the subarachnoid space surrounding the brain (subarachnoid hemorrhage). Patients experience an acute onset of severe headache, often described as “the worst headache of my life.” A person suspected of having a brain hemorrhage should seek immediate medical attention.

Blood released from an aneurysm rupture can directly damage brain cells, resulting in a variety of neurological deficits depending on the location of the blood in the brain. Bleeding can also increase the pressure inside the head. The blood can prevent the flow and absorption of normal cerebrospinal fluid around and inside the cavities (ventricles) of the brain, resulting in enlarged ventricles and a condition known as hydrocephalus. Hydrocephalus is associated with symptoms such as drowsiness and confusion.

When the blood from a ruptured aneurysm meets the surrounding arteries supplying the brain, it can cause a condition known as vasospasm. The affected artery constricts in response to the leaked blood, which reduces the transport of oxygen to brain tissues and can cause stroke and brain damage. Vasospasm is often a delayed response to aneurysm bleeding and usually occurs after 3 days and up to 2 weeks after the initial bleed.

Anyone can develop a brain aneurysm. Approximately 1% to 5% of the adult population may have a brain aneurysm. Most aneurysms are small and do not rupture during the patient’s lifetime. However, a ruptured aneurysm is seen in approximately 10 of every 100,000 people annually in the United States. Risk factors for aneurysm formation and rupture include high blood pressure and smoking. Large aneurysms are more prone to rupture than smaller ones.

Your doctor can order several different types of tests if you are suspected of having a cerebral aneurysm or aneurysm rupture. Common tests include:

A CT scan can be ordered to look for the possibility of blood leaked around and/or into the brain. It is a series of x-ray images compiled by a computer. When a contrast dye is injected into a vein, a CT scan can also show vasculature.

A spinal tap (or lumbar puncture) is done to look for blood in the patient's cerebrospinal fluid if the CT scan is unrevealing.  It is done with a needle inserted into the lower spine after the application of a local anesthetic.

Figure 3. An arteriogram of a patient with an aneurysm (curved arrow).

Options for treatment vary depending on the patient’s age and condition and the aneurysm’s size, type, and location. Aneurysms that rupture and cause bleeding (no matter what size) and aneurysms that are larger than 7 mm (even if they have not ruptured) require treatment. Smaller aneurysms, especially if they are found incidentally and cause no symptoms, can be monitored over time.

Small, unruptured aneurysms (less than 7 mm in diameter) are less prone to rupture and may not be treated. Instead, the aneurysm will be carefully monitored with yearly imaging to ensure that it does not grow and the risk of rupture does not increase.

Open surgical treatment through a craniotomy involves clipping the aneurysm. Your surgeon will temporarily remove a small piece of skull and cut the outer covering of the brain, find the aneurysm, and then place a small titanium clip on the neck of the aneurysm to cut off its blood flow, which prevents any future bleeding from the aneurysm.

As an alternative, the surgeon can perform a similar procedure known as an occlusion; the entire artery from which the aneurysm comes is clipped. This procedure is usually necessary when the aneurysm has damaged the blood vessel or is not amenable to other therapies.

Because occlusion of an artery cuts off all blood flow through that vessel, a bypass might be performed to restore blood flow to the part of the brain fed by that artery. The bypass involves grafting a small blood vessel to the artery to reroute the flow of blood around the clipped section and past the aneurysm. 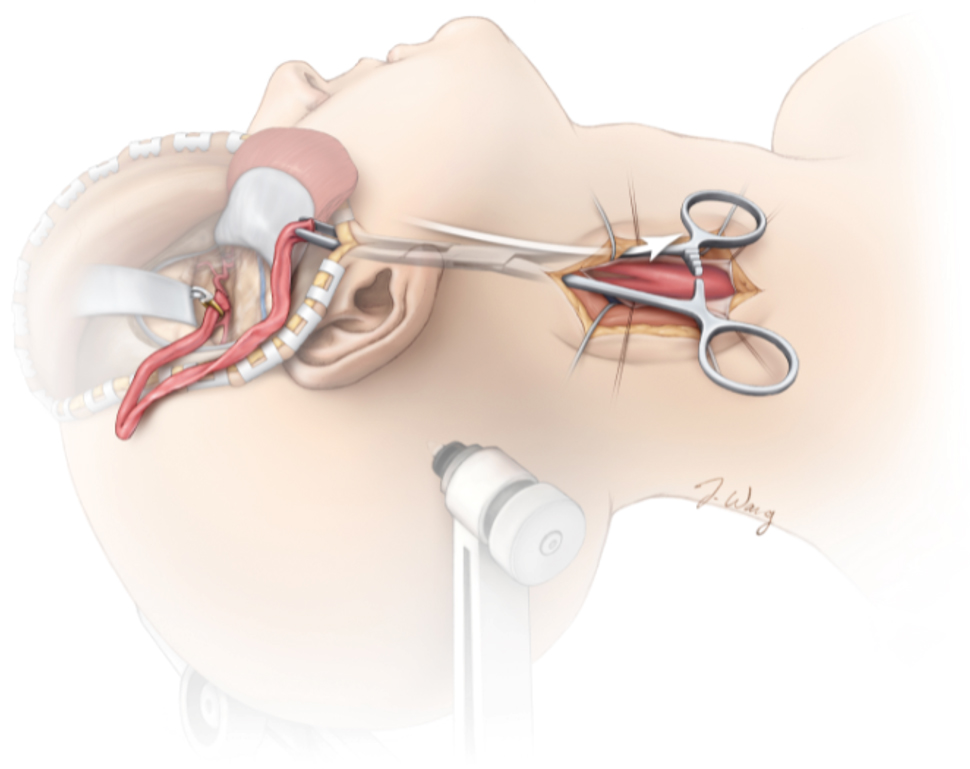 If the patient has a ruptured aneurysm, additional treatments might be necessary. A shunt or drain can be placed in the ventricles or skull to relieve the pressure of fluid accumulation from the bleeding. Appropriate drugs can be administered to prevent vasospasm or the possibility of seizures. The patient's blood pressure will be monitored and controlled through medication to prevent further bleeding.

The average hospital stay is 2 to 3 days for the treatment of an unruptured aneurysm and at least 9 to 18 days for the treatment of a ruptured aneurysm. Patients are monitored for any signs of neurological change. Antiseizure medications might be administered after surgery. Patients should avoid heavy physical activity for at least 6 weeks and discuss with their surgeon when they can return to activities such as driving.

Patients who have experienced a brain hemorrhage often receive cognitive, occupational, and physical therapy to cope with any remaining neurological and physical deficits. Rehabilitation can be intense, requiring 6 months to 1 year of therapy. The rehabilitation period is lengthy, and the patient and his or her family members must be patient and understanding. Family support services are of critical importance.

Endovascular procedures avoid the need for directly opening the skull and are instead performed via a catheter guided through the arteries from the groin or forearm to the brain. An interventional neuroradiologist or neurosurgeon will use x-rays to navigate the catheter into the affected artery to release either coils of platinum wire or similar materials into the aneurysm. The coils block off the aneurysm. Over time, a blood clot forms to effectively seal off the aneurysm.

Surgery or the endovascular procedure can completely obliterate the aneurysm in most patients. In rare cases, aneurysms can recur. Depending on other health conditions and the type of treatment used, patients may be monitored every 2 to 5 years to ensure that the aneurysm has not recurred. Recovery can take 6 to 12 weeks or longer. If neurological and physical deficits exist, a supportive rehabilitation team can help to improve long-term recovery.

The Aneurysm and AVM Foundation

Hemorrhage—bleeding from a blood vessel

Hydrocephalus—accumulation of fluid within the brain

Stroke—condition that occurs when blood supply to a part of the brain is interrupted or reduced, which prevents the delivery of oxygen and nutrients to brain tissues

Vasospasm—persistent contraction and narrowing of a blood vessel

Ventricles—network of cavities within the brain filled with cerebrospinal fluid