Chondrosarcomas: What the Patient Needs to Know

Chondrosarcoma is a tumor that affects the cartilage cells of bone. If located at the base of the skull, the patient may experience headaches, dizziness, hearing loss, numbness, facial pain, and difficulty swallowing. The recovery outlook depends on tumor size and location, presence and degree of metastasis, patient age, and aggressiveness of the tumor. The prognosis should be discussed with an oncologist and a surgeon.

What Is a Chondrosarcoma?

Chondrosarcoma is a tumor that affects the cartilage cells of bone and is the second most common form of primary bone tumor. Chondrosarcomas arise on the surface or from the interior boney structures; they typically affect the pelvis, arms, spine, shoulders, or legs but can also develop from any bone in the body, including the skull base. 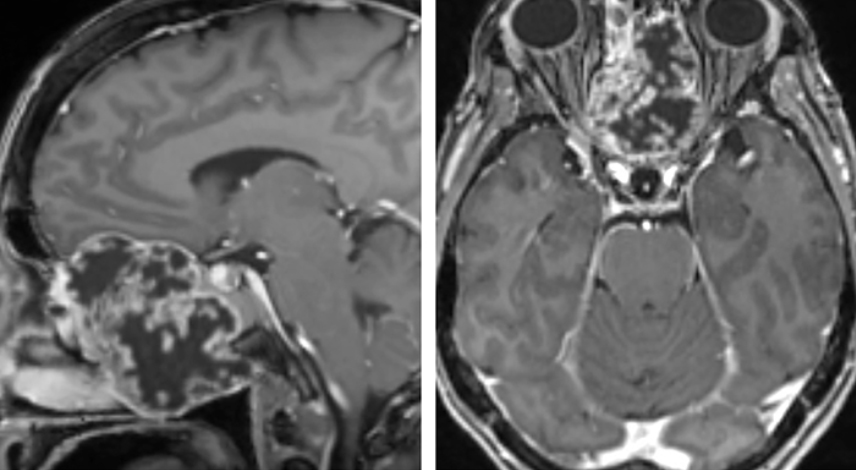 Figure 1. A large chondrosarcoma located near the eyes.

Because chordomas and chondrosarcomas that arise from the skull base or spine affect the bones around the central nervous system, they tend to present with very similar symptoms. Neither tumor is particularly prone to metastasis, localizing most symptoms to the organs and structures surrounding the primary tumor, which makes the symptoms highly dependent on where the tumor is localized.

Tumors that arise at the base of the skull typically present with one or more of the following signs/symptoms:

Although chondrosarcomas are the second most common form of primary bone tumor, chondrosarcomas of the brain are rare and represent less than 1% of all brain tumors. The vast majority of chondrosarcomas are found in older adults; they are seen only rarely in adolescents and children. The proportion of men and women affected is approximately equal.

The method of diagnosis for both chordomas and chondrosarcomas of the spine and skull base is similar. A physician will obtain a detailed medical history and perform a physical examination that may include a neurological evaluation to identify the tumor's location or to rule out alternative diagnoses. 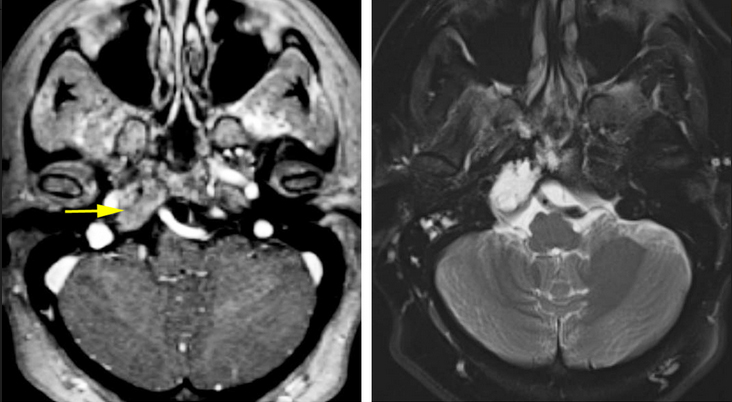 Depending on your physician's findings, a variety of tests can be ordered to identify a possible chordoma/chondrosarcoma:

Depending on what other structures are affected by the tumor, the physician can choose to order a variety of other laboratory or neurological tests to evaluate the patient’s overall health and neurological function.

Chondrosarcomas are treated primarily with surgery. However, radiation therapy might be used after surgery or in the case of an inoperable tumors. Chemotherapy is used in rare cases.

Surgery to remove as much of the tumor as possible is the preferred primary treatment. The ability of a surgeon to remove the tumor and the percentage of tumor he or she can remove will depend highly on the size and location of the growth. It might not be possible to totally excise a tumor adjacent to or encapsulating certain nerves, blood vessels, or important parts of the brain/spinal cord.

Figure 3. Illustrations of the bony structure, blood vessels, and nerves at the base of the skull (top left), typical location of chondrosarcomas at the “discolored bone” (top right), and tumor evacuation (Bottom).

For tumors located at the base of the skull, the surgeon might use a procedure known as the expanded endonasal trans-sphenoidal approach to access and remove the tumor through the patient’s nose. Endoscopic methods that use small cameras to provide a view around corners and maximize tumor removal might be used. Other methods of surgical resection will depend on the tumor’s overall size, shape, and location. 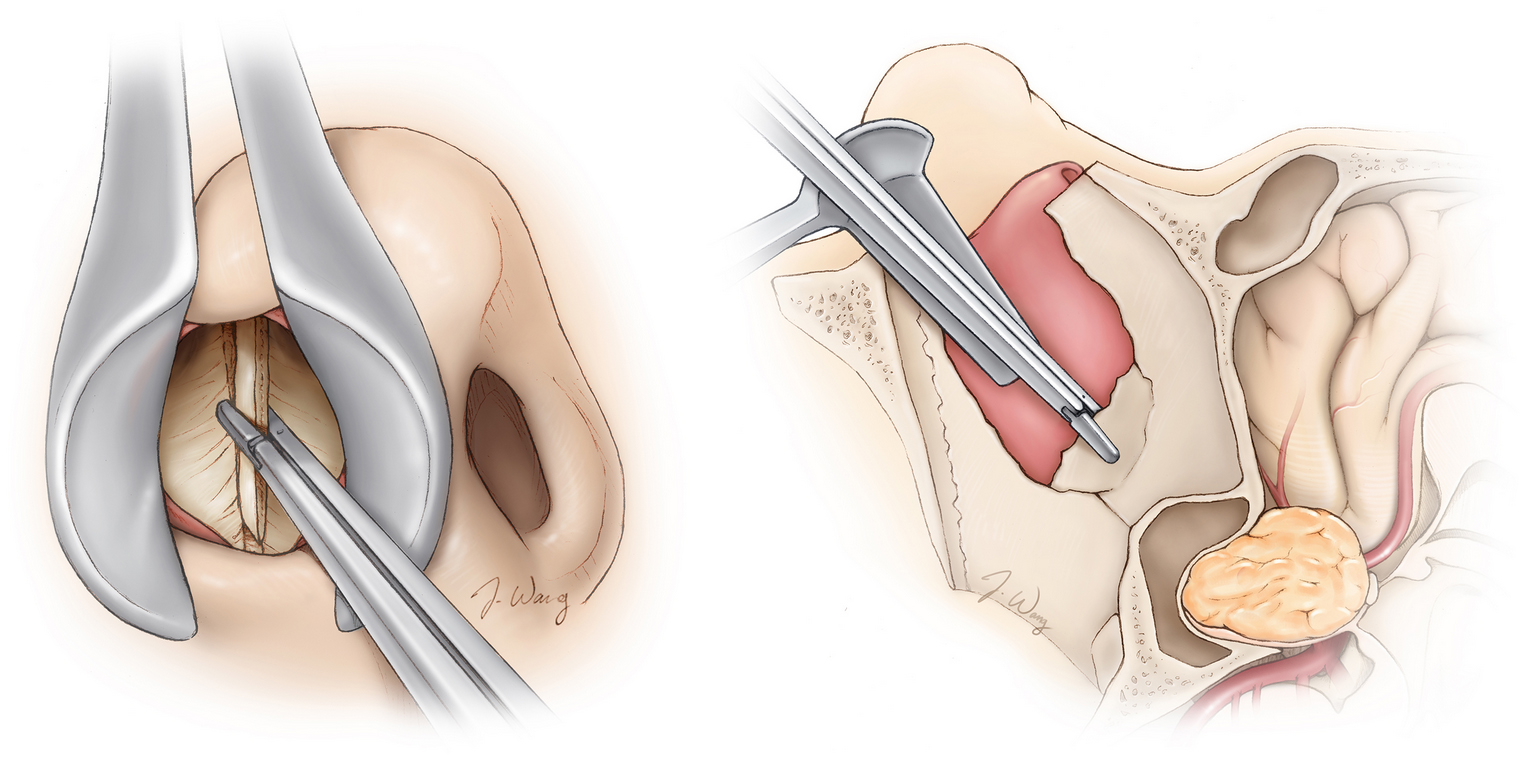 Figure 4. Example of an endonasal trans-sphenoidal approach to remove a tumor at the base of the brain.

The surgery will take approximately 2 to 6 hours depending on the location and size of the tumor. After surgery, you will be observed in the intensive care unit overnight and then transferred to a private room the next day. There will be some discomfort in and around the nose, but it is usually not very bothersome. You may be discharged from the hospital within a few days.

During surgery, if the tumor is invading or attached to the membranes around the brain (dura), a tear in these membranes in an attempt to remove the tumor can cause leakage of brain fluid (cerebrospinal fluid [CSF]) from the nose after surgery. If this is the case, your hospitalization might be prolonged by a few days to allow the surgeon to fix the leakage through a small tube placed in your back (lumbar drain) or a short second surgery to repair the leakage site. If the leakage is not corrected, the chance of infection (meningitis) increases.

Depending on the extent of your surgery, you can return to your daily activities shortly after discharge from the hospital. Any leakage of clear fluid from your nose should be reported to your surgeon.

Radiation therapy often follows surgical removal but can also be used in instances of tumor recurrence or for inoperable tumors. Radiation therapy is used to treat chordomas more often than chondrosarcomas.

There are several ways to administer radiation therapy. External-beam radiation involves high-energy radiation applied to the site of interest. Treatment usually occurs 5 times per week over the course of several weeks.

Stereotactic radiosurgery can apply higher doses of radiation to a smaller area. The radiation dose can be broken up over multiple beams. Using the radiological imaging data, your surgeon and radiation oncologist can deliver the radiation more precisely while avoiding healthy areas. It is an outpatient procedure, involves minimal anesthesia, and is done usually in 1 session.

All forms of radiation therapy carry some risk of damage to normal tissues. Specifics should be discussed with your radiation oncologist and surgeon.

Chemotherapeutic agents target the rapidly dividing cells of tumors and are rarely used to treat chordomas or chondrosarcomas. These drugs also damage normal cells in the body that may frequently divide, resulting in side effects such as hair loss and anemia.

The doctor might prescribe other medicines used to control or manage symptoms associated with the tumor.

The prognosis depends on a host of factors, including tumor size and location, presence and degree of metastasis, patient age, and tumor grade. Neoplasms (the medical term for growths) classified as low-grade tumors are slow growing, less invasive, and correlated with better patient outcomes than tumors considered high grade or fast growing. The prognosis of each patient should be discussed individually with the oncologist and surgeon.

Dura—outermost layer of the meninges

Edema—swelling due to excess fluid in tissues of the body

Malignancy—measure of how aggressively a tumor is growing

Meninges—outer membranous covering of the brain and spine

Metastasis—spread of a tumor to another site in the body